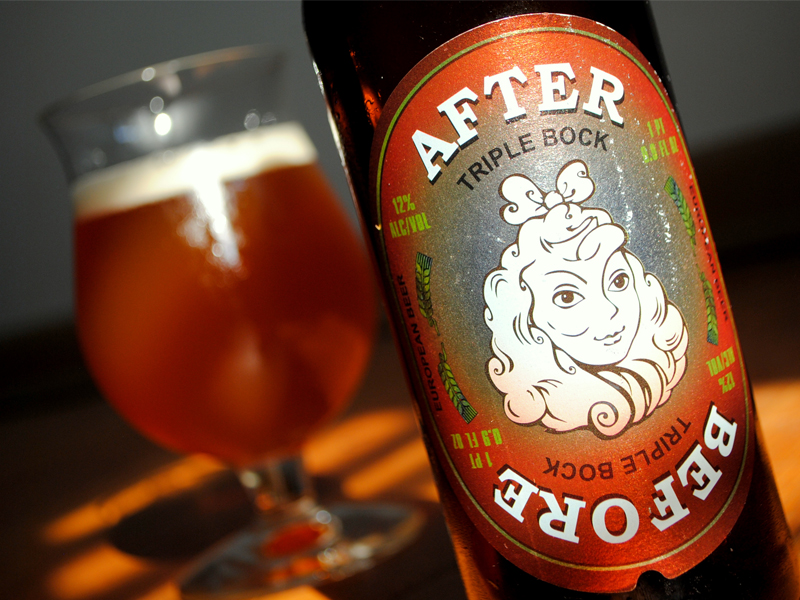 Rinkuskiai brewery is located in the city of Birzai, a region apparently known throughout Lithuania as the capital for Lithuanian brewers.  Unfortunately, besides a few paragraphs on Aiko Importers, and the even more limited (and difficult to find) English section of the Rinkuskiai website, information regarding Rinkuskiai is scarce (at least for Americans), just like most of their beers.  Just the other day, however, I found a brew from Rinkuskiai that I’d actually seen before: a “triple” bock by the name of Before-After.

Before-After poured a delicate burnt orange color, leaning more towards the orange, with a foamy, off-white head.  The beer initially appeared quite frothy: a normal development following an apathetic slosh, I know, but Before-After was surprisingly thick and murky for its bright color.  Normally, one would suspect such a bright color to denote a more diaphanous nature in one’s beer.  Oh no.  Not this one.

On par with Before-After’s stocky body and sharp colors, its fierce aromas wafted into the air without any instigation: I could smell it simply from opening the bottle.  When it was finally poured out into my glass, its redolent, sweet scent practically overflowed.  The smell was almost unbearably rich with malt and yeast: it was difficult to get a grasp on much else.  There were also hints of roasted barley and perhaps banana, but even those were difficult to discern.  To be honest, this trouncing miasma of malt was beginning to trouble me.  There was only one solution: taste the beer!

Unfortunately, Before-After tasted as malty as it smelled, and finished with a slight alcoholic burn.  There was also an underlying hop, imparting bitterness to the beer with little actual hop flavor.  And there wasn’t much else to it, but that was okay.

You see, ever since I started researching Rinkuskiai, in order to understand Before-After, two very pertinent facts have become increasingly clear: they brew for the purpose of effect (i.e. inebriation); and they love to joke about it.  And moreover, nobody really minds.  As one reviewer put it, Rinkuskiai beers are “like a B-movie that is so bad it’s good.”  Also, don’t be fooled by the label “triple bock.”  No such thing exists, and Rinkuskiai’s not trying to advance the tradition of Eastern European strong ales.  Per the style listed on Aiko, Before-After is intended as a “Euro Super High Alcohol Lager.”

Overall, Before-After was tolerable.  Just like the label suggested: the more I drank, the better it got, though it was pretty bad to begin with.  The bottle was cheap, somewhere around two dollars, but it came in a proper pint, making it one of the biggest, cheapest, “high-octane” beers I’ve yet seen that isn’t a malt liquor (although that’s exactly what some think it is).  I wouldn’t recommend this beer if you’re looking for a well-crafted bock, or something to take a craft beer sampling.  Before-After wasn’t made to be sipped, Before-After was brewed to party.