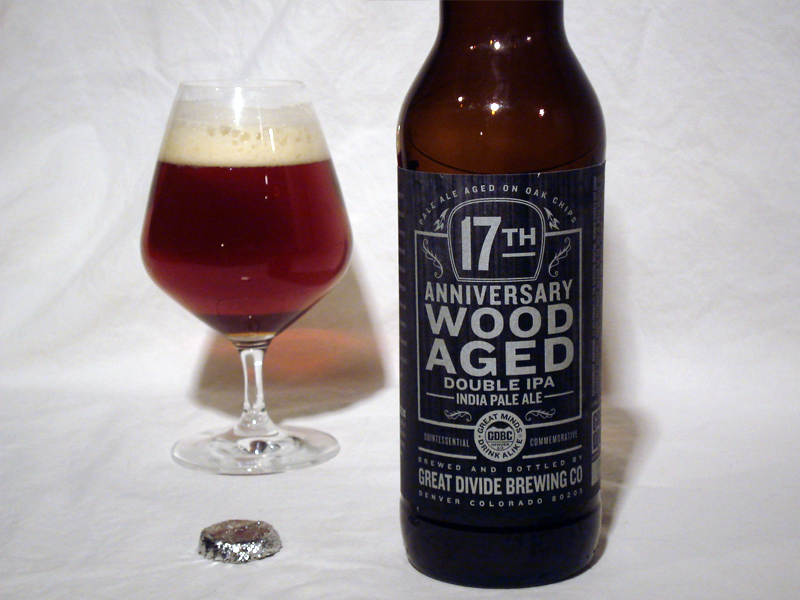 Based off their DPA, year seventeen tasted very close to that of its predecessor.  It too was aged on American and French oak chips, brandished the same abv, and seemed to embody a similar malt and hop profile.  The only thing that was noticeable different was the label.  Last year (16th), the grain on the label was horizontal and had a deep mahogany hue.  This year it was more gray in color with the wood grain running vertical.  I digress.

I did not cellar this bottle for a year so enjoying it fresh brought out some differences.  Most notably in the aroma.  While the remembered hints of pineapple, apricot, peach, vanilla, tannin, toffee and caramel where present, they seemed to give off a much lighter vibrant smell.  Call me Captain Obvious.  I did find a more lemon-ish aromatic that seemed to usher in the abv heat which was more evident this time around.  My best guess is that the abv quality is pushing the pineapple notes up and breaking them up (at least that’s how I see it play out in my head).  The oak quality is a little stronger which I did not mind.  Hops…still sticky, resinous and piney.

The flavor was pretty much the same.  However, the wood sugars and caramel combined to form a plum, sugary date flavor which reminded me of a Quad.  When tasting the hop character I noticed this years vintage was just as pungent and resinous as the one before.  Interestingly, a layer of grassy herbal English hops was discernible.  There is definitely an English style pale ale behind the abv.  A drier toasty malt body made up with rich toffee and caramel flavors are heightened by pretty big tannins that have a drying effect on the finish like that of a Shiraz/Syrah or Malbec wine.

Now that I’ve had Great Divide’s Anniversary IPA two years in a row (aged one a little and had one fresh) I found that the aromas and flavors are really similar if not the same.  While it is a great beer, don’t be expecting a huge difference.  If anything, this beer will make you a sharper beer critic and hone your senses trying to find the subtle differences.  And that, after all, is a good thing.