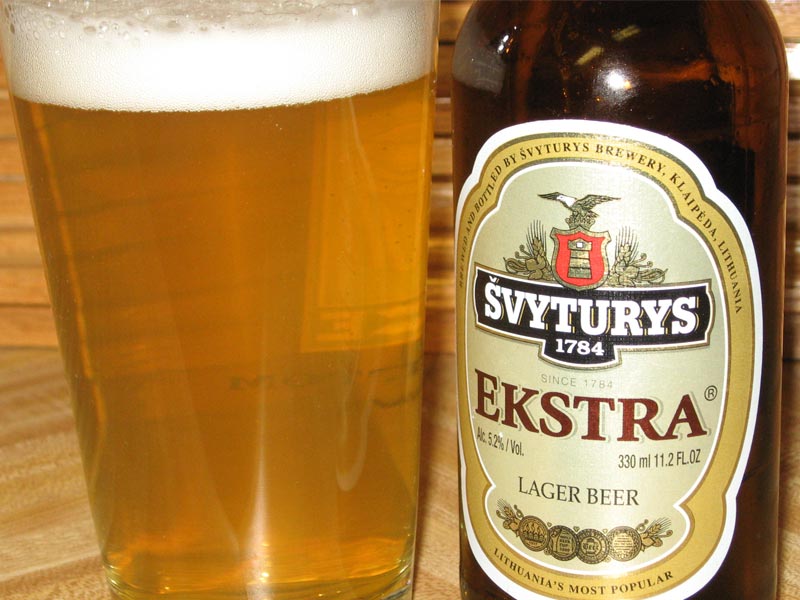 After a long day it was time for a brew. I found the selection of this beer to be rather comical. I wanted to try a beer from a new country, but I was looking for a beer with some dynamic. You know…something other than the classic “lager beer” that every country seems to produce. What I ended up purchasing was a mixture of the two. It was a lager beer from Lithuania.

The back of the bottle is rather confusing and made me wonder if the brewery knows its stuff. In the explanation read, “Ekstra is a crystal clear, golden ale with a dazzling white head. There is something about the texture of this ale, which is the essence of purity.”

While you can lager an ale, this beer was definitely of the adjunct lager family which in my humble estimation is not an ale (based on yeast used). Now, they could have used an ale yeast strain, but why would they advertise it as a lager beer on the front of the label.

In any case, the brewery boast that it is the most popular beer in Lithuania. Heck, it might be the only beer brewed in Lithuania. I would say that this beer beats the crappy light adjunct lagers here in the US. It was a hazy, light straw color and it did have a dazzling eggshell white head. The aroma was pleasant and almost Kolsch-like (slightly fruity) causing me to rethink my earlier griping over the ale/lager issue. They use rice as an additive to lighten the body which actually made this beer pretty enjoyable and easy to drink. There was a refreshing, crisp aftertaste and the hops left a minor bitterness. I was expecting this to taste like a classic skunky Euro lager and came away rather impressed. I’d definitely by a six pack again.