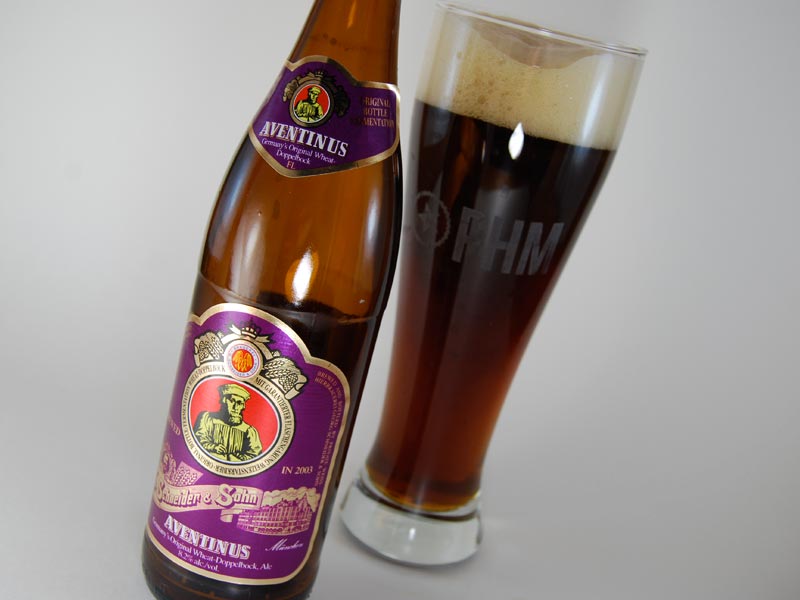 Tom: I picked up this bottle of Aventinus at Whole Foods per a recommendation from my buddy Paul (the beer guy there). However, this was no regular bottle. As the finely wrapped bottle indicated, it had been brewed in 2003 and cellared in the ice caves of Kelheim for a minimum of three years. They’ve done this with only 240 cases at a time since 1999. The brewery boasts that they make the world’s oldest doppelbock and to great acclaim.

I was stuck inside waiting out the blizzard of 2011 that fell on Chicago. An epic storm called for an equally epic brew. I was so nervous as I cracked open this 7 year old brew, not sure what to expect.

Recalling that I’m not a big fan of German Hefes and having had some sub par weizenbocks, I gingerly poured the milk chocolate colored contents. I wanted to be mindful of the sediment at the bottom and know that the head of most wheat beers develop exponentially. To say the least, my pour was weak sauce and it didn’t produce the appearance I was looking for. Later I did swirl some sediment to add to the glass.

I found the aroma to be more bock-like than wheat beer. There were large hints of malt, malt extract, kilned grains, toffee (big time), and caramel. It was mellow, chill, relaxed as the aging took off some major notes of banana which I was grateful for. Clove and chocolate also contributed a great deal to the aroma.

These latter aromas were definitely in the spotlight in the taste. Milk chocolate graced the front of my tongue and paired well with the light tropical blend of coconut, light banana, and cloves at the finish. Vanilla tones came out, but on the whole this beer was malt-centric. The mouthfeel was moderate with help from the wheat. The aftertaste was bready, yeasty, and malty. The abv was nonexistent and hide behind toasty flavors.

If you are a fan of weizenbocks, bocks, or malty brews you’ll enjoy this aged treat. It finishes smooth and is rather refreshing with some residual sugars. In fact, it was similar in taste to the malt extract that is used in home brewing.

I’d like to try a fresh bottle to compare the difference. Grade: B+