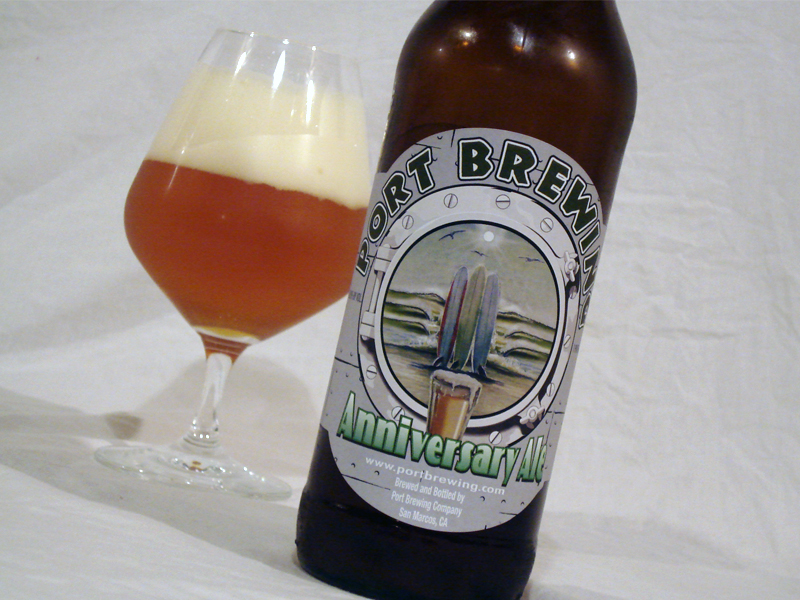 Had this beast of a beer last year at the Bavarian Lodge and loved it.  I’ll tell you right now, this thing might as well be a double/imperial IPA even thought Port calls it a Strong APA.  The ABV is definitely up there and it is hoppy as all get out.  Released in the Spring/Summer every year this beer is great for the summer months when you find yourself in need of an extremely bitter beer.

My first thoughts after taking my first sip were, “This is close to Founders Double Trouble, Stone Ruination, Three Floyds Arctic Panzer, and Lagunitas Hopstoopid” and “Port does their IPAs well, nay outstanding.”  This latter thought is very much true.  Whether it is this beer, Mango, Wipeout, Hop 15, or High Tide, they make some of THE best IPAs on the market.

The malt profile it light and bready sweet.  The hops…huge and in your face and all up in your palate.  Seriously, this beer breaths hops.  When the creamy off white head settled on this clear yellow-golden colored beer all I could smell was hops.  Resins and oils took the offensive!  My nose was filled with the sticky hop quality from the dry-hopping that consisted of Amarillo and Columbus.  These hops brought an aggressive pungent grapefruit aroma along with orange and lemon.  The ABV was evident big time as it stung my nostrils.  Definitively on the fruity side yet piney earthy notes could be found.

Towards the end of the bottle the sediment (probably hops) poured out, but seems to intensify the hop presence (like a built in Randall).  The abv and bitterness combined to almost make me sneeze.  This beer has some heat behind it not to mention a punch.  I’d say the term “bitter” is an understatement.  My breath smelled of hops for hours.  Some malt sweetness lent a minor honey’d quality while the hops coated my tongue, teeth, and roof of my mouth.  More piney now than in the aroma with a slight citrus character.  The finish is dry and rather harsh, but you get a wonderful hop focused aftertaste.  A must have beer for the insane hop junkie.