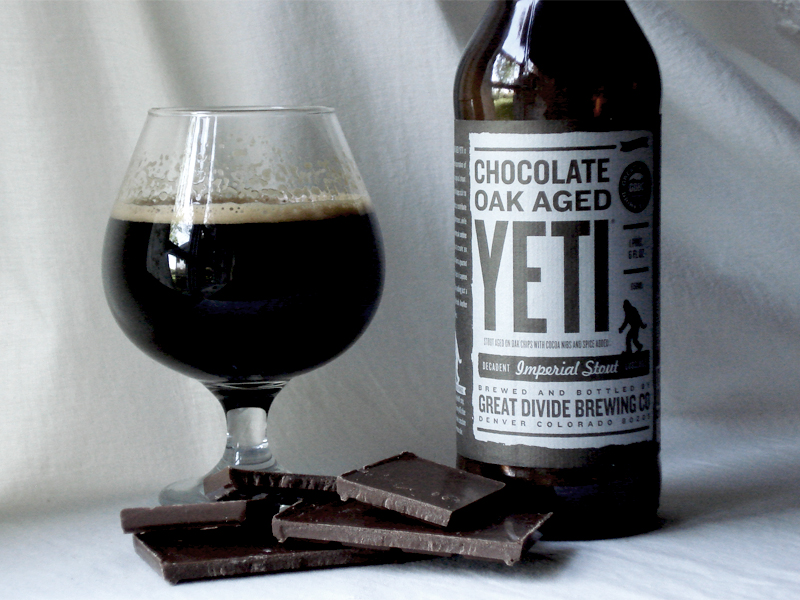 May 17th, 2011 marked a milestone for me. I can now proudly say that I’ve sampled the Yeti Imperial Stout Series. It took me two years as this particular brew seemed to elude me, but at last the four variations (see also Yeti, Oak-Aged, and Espresso Oak-Aged) have passed my lips to great acclaim. I can assure you, the Yeti (Sasquatch) clan is very much alive and real.

Cracking open the March 24th brewed bottle I could immediately tell this was going to be a bitter beer. Not in a hoppy way as Great Divide reduced the hopping in order to allow for the cocoa nibs to contribute their dark astringently bitter qualities. In addition, they also added cayenne pepper to provide a little kick. It poured like sludge, pitch black in color with a very dense and fluffy head reminding me of chocolate mousse.

The fact that it was only bottle a few months ago was noticeable on the nose. It was fresh, but almost too astringent and boozy at first. Letting my senses acclimate themselves, I took some time exploring what aromas the cocoa nibs and cayenne added. I found a smell similar to an 80-95% cocoa dark organic chocolate bar mixed with some warmth from both abv and pepper. The coffee notes found in previous variations were minimal as a cocoa powder/syrup aroma was more distinct. It smelled a little like a mole sauce to be exact. The nibs and oak chips combined with the grains to create an utterly burnt aroma similar to that of a camp fire. This was by far the most aggressive Yeti of the series.

The mouthfeel is heavy, viscous, and palate coating. Surprisingly, the initial quaff was not overwhelming as the oak aging provided a mellow smoothing-like effect to the front of each sip. The cayenne lends an interesting dynamic to the finish. The brewer’s added just the right amount to give a residual spicy pop in the aftertaste while at the same time not pulling attention away from other aspects of the beer. The chalky finish is abrasive and bitter quickly displaying vanilla, burnt caramel, and pepper notes.

I found it enlightening to experience a great deal of bitterness coming from a source other than hops. If you have a bottle I would recommend laying it down for a year or more. This will give the flavors a chance to mellow out and become well-rounded.

I also paired it with Moody Blue cheese which very interesting and delicious. The smoked bleu is pungent, earthy, and creamy. This aided in canceling out some of the bitterness in the beer. Moreover, the oak aging blended with the smokiness in the cheese to further smooth out any rough parts creating a velvety mouthfeel. Lastly, a goat cheese saltiness balanced out the spice in the beer which did a great job lifted the cheese off my palate.

Rumor has it that a Belgian Yeti was possibly spotted … be on the lookout.