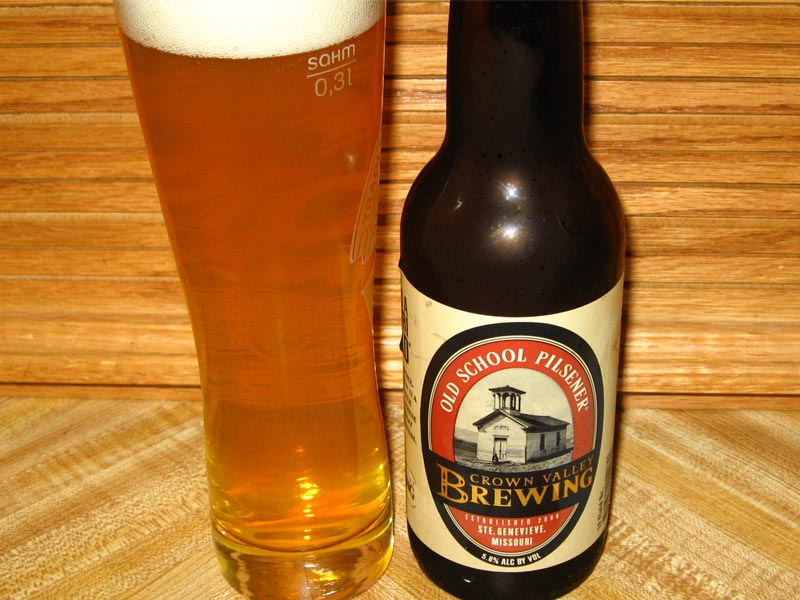 Sampling beer from a new brewery is a two sided coin. It excites me, but at the same time terrifies me. Most often it probably comes down to my line of thinking which goes something like, “this could be a really great beer or suck something fierce.” This new brewery I speak of is located in Missouri and goes by the name Crown Valley Brewing & Distilling Company. They offer a wide selection of 11 different beers and ciders all named after some old time rural country icon. With a slogan of “Brewing a Missouri legend” let’s see how this company performs.

The beer under scrutiny is a Bohemian-style Pils that should provide a crisp, easy sipping beverage. Typical to style Czech Saaz hops are used which are present in the aroma and flavor adding a spicy dryness to the beer. While looking like a classic pilsener with a straw-gold color it did have a minor cloudiness to it. The carbonation was substantial and promoted the consistent layer of foam and lightened the mouthfeel.

I did find the aroma to be a little weak. It smelled more like lemonade mixed with a wheat beer than anything. After some time and sips the aroma of hay or straw entered into the mix. According to my palate the beer was not as crisp as I hoped. The light malts lasted too long on my tongue before the hop finish took over. It was still refreshing and left a pleasant aftertaste, but overall it lacked a little liveliness. Interestingly, there was an apple-y finish to it. This beer alone what not enough to deter me from trying another beer from this brewery.