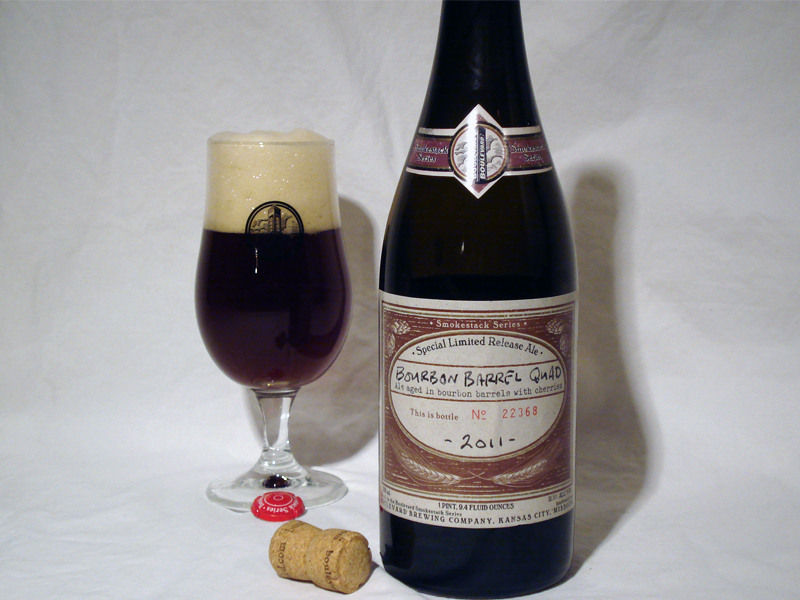 Take The Sixth Glass add some Bourbon barrels and cherry puree and what do you get?  BBQ!  As Mark Starr so eloquently put,  the name plays tribute to the great culture of KC, Missouri in that Bar-B-Que is a staple.  I personally think this beer embodies what a barrel aged beer should.  It allows the base style (Quad) to shine though, yet incorporates the nuance of both the cherries and Bourbon barrel qualities.  I don’t think I can fully explain how good this beer really is.  Note: I listened to Mark’s review multiple times while writing this review and I agree with him and Tim Pratt 100%.

The pour was magnificent!  A rich and inviting bronze hue with yellow-orange edges giving way to a frisky head that develops quickly.  It is fluffy and dense with a darker khaki hue.  The carbonation lasts the entire sip as there is a light film that covers the top of the beer.

I sampled this beer twice (bottle #s 22368  and 23334) both from the same batch (#3) and I must say it sure does set a standard of what a barrel aged beer should tastes like.  Boulevard picked a great base style to experiment with.  The Quad flavors found in Sixth Glass lend themselves perfectly to being aged in Jack Daniel’s Whiskey barrels (from TN).  Interestingly, this name “Bourbon” should not be applied to this beer’s label as it was not aged in barrels from Bourbon County, KY.  Boulevard mainly uses Jack Daniel’s and Templeton Rye barrels to do most of its aging (see Hopry review).

When putting my nose to such a beer I found myself thinking, “so this is what a perfectly barrel aged beer should be!”  Wonderful notes of tannins, char, wood sugars, and tart cherries filled the glass and surrounding air.  It had an interesting sour aroma that gave the impression that Brettanomyces were used, but it was just the interplay between oak barrels and the cherry additives.  Not too over done…just right.  I gave a very welcomed fruity nose to the massive vanilla, caramel, Bourbon barrel notes that were pervasive.  This beer was aged and blended so well that I got a good showing from the Quad style which was bathed in deep fruity notes from the barrel aging and cherry additives.

The flavor was full bodies and outstanding.  It reminded me of a Flemish sour or Kriek while at the same time exhibiting the bigger, bolder flavors of a Bourbon and Quad.  Think about it.  This beer is aged for eight months to two years in these barrels to it has plenty of time to smooth over and round over the sugary qualities of the original Quad.  I wholeheartedly believe that the barrel aging brings out the best in Sixth Glass and brings it to the quality of a Belgian Trappist Quad.

Cherries add a tart and lively quality that gives you a lighter dimension to the darker fruit characters of plum, dates, figs, and raisins.  The vanilla notes found in the entire sip make this beer rival that of a vanilla cherry Coke.  The carbonation gives this beer some life and pep which is welcomed as the mouthfeel is on the heavier side due to barrel aging.  If you can get your hands on a bottle savor the flavor as it is one to slowly enjoy.