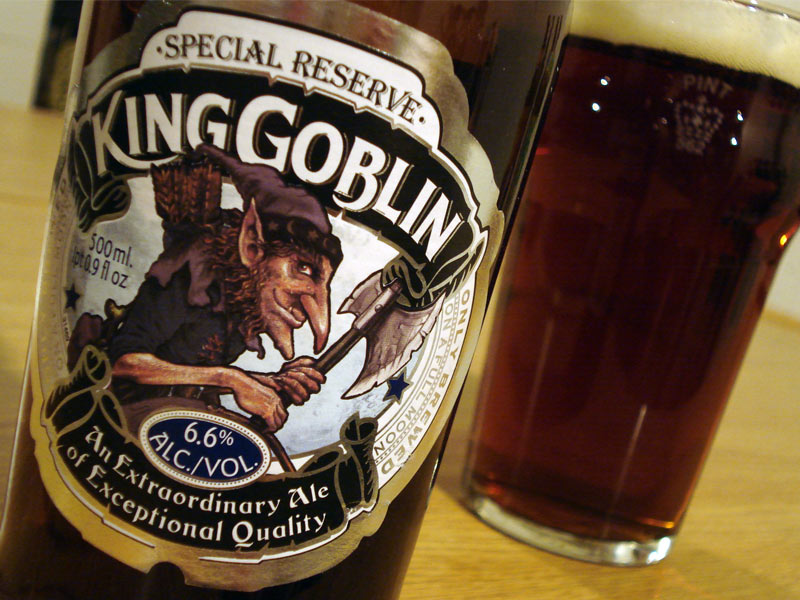 A big cousin to Hobgoblin, King Goblin offers a more enchanted approach to it’s dark ale counterpart. Brewed on a full lunar moon this beer is a special release with a bit more of a kick. It is by no means a double recipe of Hobgoblin, however there are a few more hops added to the mix and the use of pale malt is scratched from the grain bill.

Similar in appearance with a touch darker hue that looks more like cherry or mahogany wood. The two finger head was dense and frothy also leaving rings of foam on the glass. When holding the glass to my nose, I got a much deeper sense of the malts used. Where the pale malt helped to lighten their aroma in Hobgoblin, here both the crystal and chocolate stand side by side ushering in pleasant toasty notes. What came to mind was the smell of toast popping out of the toaster and then applying jelly on it. Much sweeter and lacking the biscuit qualities. It could be a brown ale for all I care as there is some nuttiness to it. The hops are similar in that they give off an earthy herbal aroma.

Again, a very jamy with a heavier mouthfeel. It seems the malts were amped up a little along with the hops to create a relatively stronger beer. It is still very dry at the finish and the cascade hops do not offer as much floral characteristics as I had expected. The jamy-ness reminded me of some Quads as it carried a grape-like flavor. Equally smooth, the beverage did have a creamy mouthfeel. There was some astringency in the grains, but I found this on the back half of the sip where the hops displayed most of their muscle.

A hearty brew paying tribute to the lunar cycle. Now off to get some sleep.