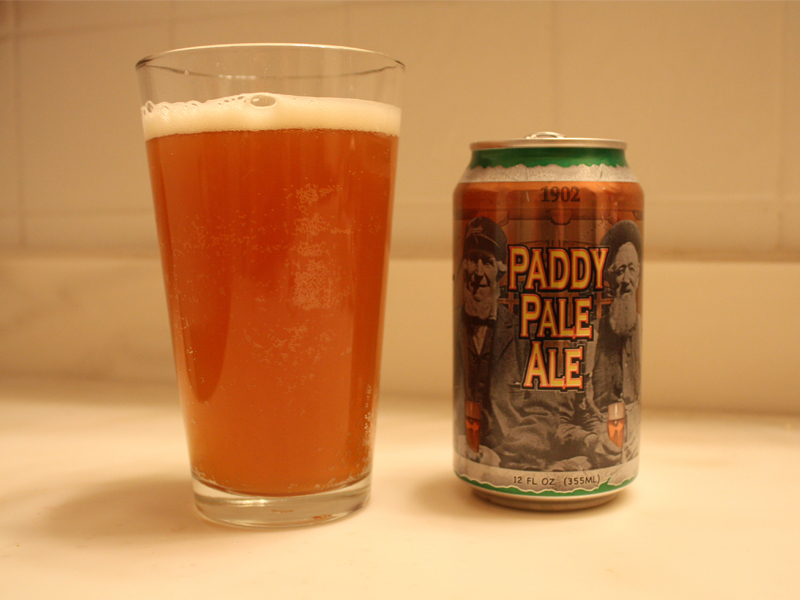 It has been a long time since I’ve written about beer. Life has been chaotic in my world, but not chaotic enough to give up drinking beer, just a bit tough to consistently write about it. Here I am reviewing a beer that is local to Chicagoland, brewed by the Wild Onion Brewing Co, out of Lake Barrington, IL. I saw this six pack of cans on the shelf at Binny’s and in light of the positive review of their Pumpkin Ale, I thought it was a no-brainer. I was right.

This beer pours a rich, orange cloudy color with a small but present head. It dissipates quickly; reduced to a film before I’ve even taken my first sip. I’ve had five of these beers over the past week, leaving the final can for review. I’ve enjoyed all of them. The aroma is very floral and pleasing. Smells of flowery hops, with a hint of pine thrown in. Based solely on appearance and aroma I can tell this is going to be a tasty beer. The first sip brings with it a very palatable caramel malt sweetness, followed by a distinct bitterness on the finish. The balance is great. It finishes bitter but smooth with the carbonation done just right, and definitely leaves you wanting another sip. When a beer does that to my taste buds, I classify it as drinkable. Paddy Pale is easily of the more drinkable American pale ales that I’ve tried, and I have enjoyed many.

Wild Onion was smart to keep the ABV in check at 5.6%, as this beer is easily what they describe it to be: a robust session ale. I pick up some lemon / citrus notes throughout the course of drinking this that only add to the enjoyment. People afraid of very bitter beers should find this one very tolerable. As it remains true to style with its hoppiness, the finish is not overpowering. It does leave a bit of hoppy stickiness on my palate, but that’s easily wiped away with another delicious sip.

Overall, I think this beer is a great addition to a rapidly growing microbrew scene that’s sweeping Chicago. I can’t think of a time when I wouldn’t be thrilled drinking this if it were offered. Wild Onion is 2/2 so far here at the Perfectly Happy Man, and we’re excited to see what else they have to offer. Local enough to possibly plan a trip to the brewery? I think so.