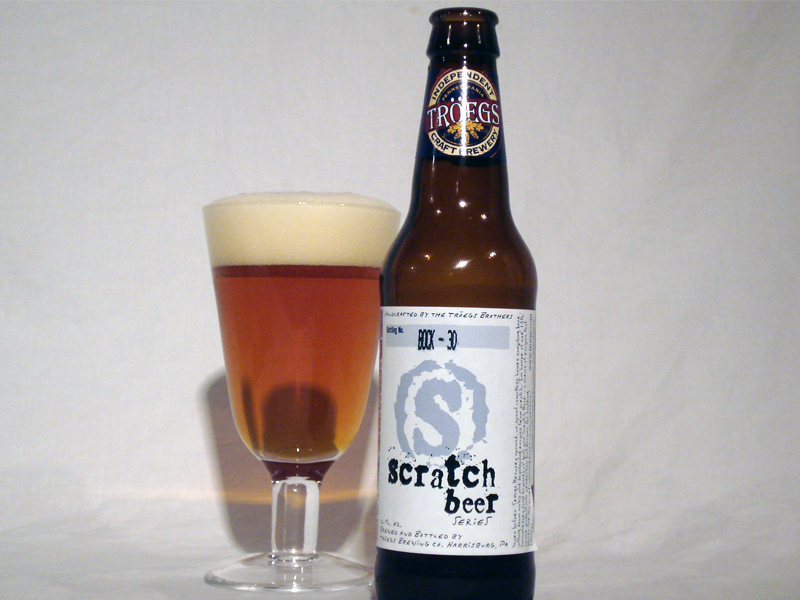 I’ve had this in my fridge for over a year.  Wow.  Good thing this is a bock and probably matured a little with some cold cellaring.  This, my first Tröegs brew, could not have been better.  This Bock was a part of their Scratch Series where they brew various beers that they made “pre-Tröegs” you might say.  While I don’t really get into bock beers, at least the dark ones, I’m a huge fan of Mai/Helles bocks.

I could tell it was a Maibock right away (before any Google searches mind you) by it’s very clear golden hue and dense yellowish head that laced.  I’m sure the year long chill in my fridge helped to settle any yeast that was suspended and clarify this beer, because it was crystal clear adding to its appeal.

The aroma was pure goodness.  Grassy like a pils, but malty like a…well, bock.  Light caramel notes danced within the bready confines of a smooth malt profile.  The biscuit malt was noticeable lending a grain bag kind of smell.  That combined with the earthy hops do create a rather drying aroma that is slightly refreshing as the malts are then are allowed to shine.

The taste is classic Maibock.  So much so I thought it was fresh from Germany.  The malts have a firm, yet silky presence.  The malt flavors are straight forward letting you know it is a bock beer you are drinking.  However, the mouthfeel is light as the beer glides across the palate.  Mid sip the abv is somewhat apparent right before the grassy, herbal, earthy hops take over.  I’ve had freshly tapped, well-hopped Maibock before and this taste just the same.  Caramel notes gently flirt with pils and biscuit flavors making for a light toasty quality.  The hops have a drying effect making you come back for more sips to quench this effect.  A very presentable beer that I think should be brewed year round.