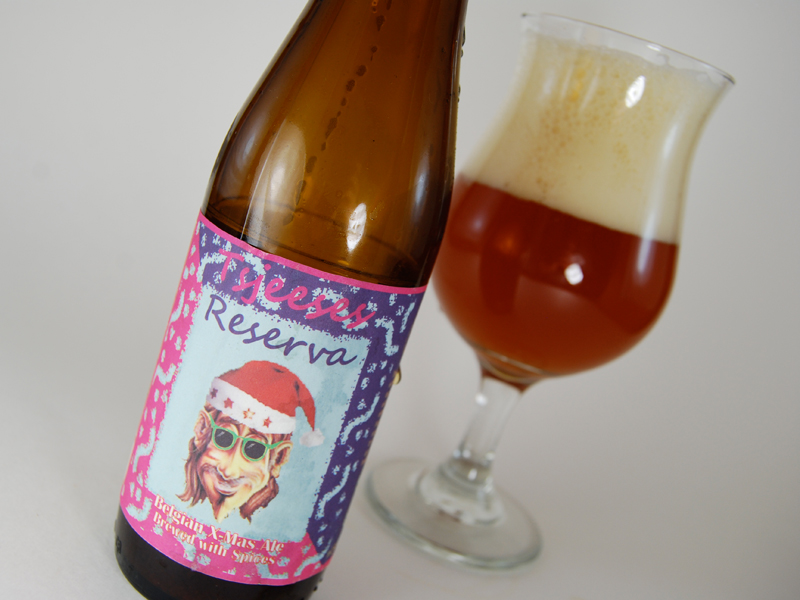 A friend just got back from the beer lover’s dream trip. He sat in my office and described his river boat tour through Belgium and I practically teared up. He described beer after beer, reveling in each one, reliving the taste and making me, well, jealous. So, while I didn’t hop a plane the next morning, I did reach into the back of my fridge to pull out this Belgian from De Struise.

Labeled with a crazy-looking, goateed, sunglass and santa-hat-wearing dude, I was intrigued from the get go. Also, Tsjeeses Reserva was, perhaps, the most unusual name of any beer I had yet sampled. Come to find out, this ‘dude’ I so casually described was, perhaps offensively to some, Jesus. The brewers describe the name saying: “Every time [the brewmaster] drinks one, he says “Tsjeeses, what a beer”. Therefore the name is more an expression of stupefaction than a curse. We have had already many discussions around the pronounciation of “Tsjeeses”. Very close would be that you say “cheeses” or cheese in plural.” Well then, there you have it.

With the increased expectations that I’m about to partake in something that would cause me to say “cheeses,” I poured. Out came a deeply orange brew with a big ol’ fluffy head. It burst at about three fingers till it calmed down and a nice layer remained circling the rim, draping its lace gracefully down my glass. Some definite yeast sediment settled towards the base of my glass. It smelled delightful, maybe not quite “cheeses,” but pretty darn good. There are big time fruity notes, but delicate enough that they come and go and I have to breathe deep to sniff them all in. Basic yeast and hearty malt shine through as well, with perhaps a faintly sour note as well. I fail to describe it well, but its better than decent.

I plunged headlong into my first swig, like jumping into a dark lake, I had no preconceptions, no ideas of what may be swimming beneath the surface. And in this one, it was just a bit of really great beer. It was more complex than the nose. There was a strongly caramel center to it all, with a prickly pear on the finish, that was perhaps the sour notes on the nose. There was a lingering, dry, spicy finish, it felt like I swallowed a dash of tempered pepper and it stuck to the back of my tongue. On second sip the malts were even bigger, bolder. The whole thing was more in my face, with the alcohol finally making a visible appearance with a warming rush. The dry, spicy finish morphs in a weird way to an almost old-bread-type feeling that sits at the back, reminding me of what a big beer I just swallowed.

This one is great. You just have to try it to get the full picture. It was nuanced, but big. It was delicate but flavorful. While not quite a river tour to Belgian, I would definitely say ‘Tsjeeses, what a beer.’