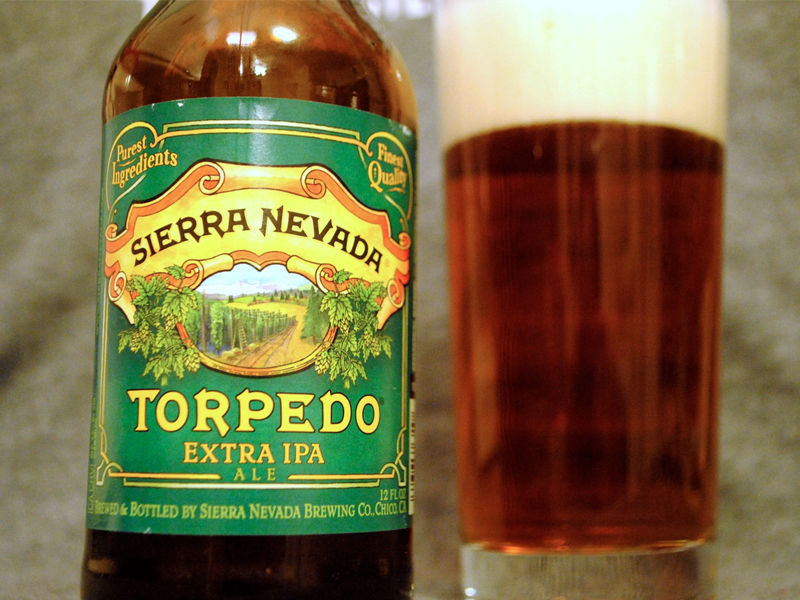 Sierra Nevada Brewing Company is quickly becoming a prime example for how a socially and environmentally responsible company can compete, and indeed succeed, against the careless corporations of America. Their flagship Pale Ale currently stands as one of the best-selling ales in the U.S., often featured alongside such inferior beverages as Budweiser and Miller Lite.

Of course, as their distribution has grown, this California-born brewery has managed to start shipping out some of its lesser-known brews, such as their Porter, Stout, and even Hefeweizen. Recently, I managed to get my hands on their Extra IPA, entitled Torpedo, and for such a petite bottle, it contained explosive flavor.

Upon the first pour, Torpedo formed a slightly fluffy, off-white head, and retained it excellently at around the half-a-centimeter mark. The body of the beer poured hazy, but eventually cleared, revealing a brilliant, copper tone.

The smell was incredible (if you like hops). Somehow the hoppiness seemed more holistically hoppy, ripe with pine and citrus; this is because, among the hops used in Torpedo, is a rather new variety called Citra. Citra hops have only come onto the scene over the last few years, having been officially released in the U.S. in 2008. They have a vibrant, tropical aroma and flavor, and something else that’s hard to put the finger on. If you’ve read other reviews of Torpedo, you’ve probably noticed people describing it as containing pine, grapefruit, mango, pineapple, papaya, etc. Don’t be fooled. It has none of those, just a whole lot of Citra.

The beer’s taste was, as anticipated, hoppy (duh) and tropical. The sensation of hoppiness was mild at first—almost smooth—but was quickly overtaken by a spicy citrus (most likely the effect of the Crystal hop flavors transitioning into the Citra). The finish was crisp and reminiscently floral, echoing just a touch of malt.

As far as an IPA is concerned, this is almost exactly what to look for: a lot of hop, i.e., floral, and citrus tones; a flavor that diminishes the taste of alcohol; and very mild to minimal taste of malt or barley. The only possible complaint I could make is that it lacks the complete smoothness of more critically acclaimed IPAs, e.g., Pliny the Elder by Russian River Brewing Company. But considering you’re more likely to find an eyelash in a ball pit than find Pliny east of the Rockies, Torpedo is an excellent alternative.