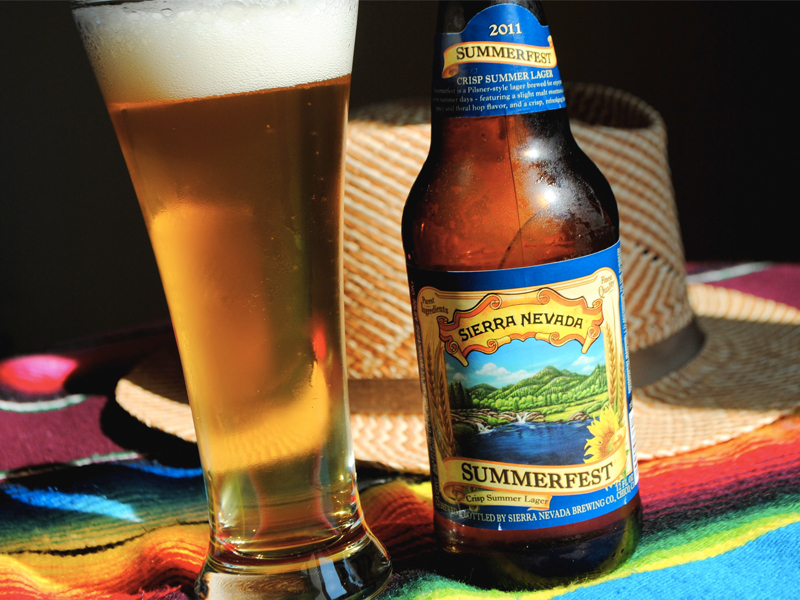 I’ve got to admit first and foremost: I love pilsners, and pilsner-style lagers. Perhaps, it’s in my Hungarian blood, or maybe I developed a taste for it while living in Cincinnati, Ohio (for Germans what Holland, Michigan is for the Dutch). Of course, the Germans don’t always do pilsner-style lagers as good as the Czech, but they’re getting pretty close, and now Americans are too, for that matter.

All-star, Californian brewery Sierra Nevada is among said American breweries, but really this is no surprise. The beer is their summer seasonal, Summerfest, and its qualities are in its name: a celebration of the summer season. It’s a light-bodied, pilsner-style lager, rich with the savory flavors of grain and malt. Sierra Nevada also knows how to use hops, as many of the excellent reviewers on this site have pointed out, and Summerfest is no exception. So, while it is brewed in the pilsner style, its use of spicy hops may turn off any pilsner purists.

Even then I’ve got to hand it to Sierra Nevada. I recently had the opportunity to visit the Haufbrauhaus in Newport, Kentucky, just across the Ohio River from Cincinnati. July is one of the best months to go, as their featured seasonal-of-the-month, the Bohemian pilsner, is sensational. Still, I liked Summerfest more.

The differentiation between Summerfest and the Bohemian pilsner: the hop flavor. Sure, it’s no longer a pure pilsner, but neither is any other pilsner-style lager brewed outside of Plzeň, Bohemia. Creative license abounds for pilsner-style lagers, or any beer (especially if you’re Sam Calagione). Just consider yourself lucky to be living in the American Beer Renaissance! I think the best is yet to come.

Semblance: pure gold, very much in the likeness of wheat in harvest. A snow-white head was formed on pour, rising to the rim of the glass in lumpy wisps, before descending back down to almost the surface of the beer. The head was then maintained at less than a millimeter, but still quite present.

Scent: lots of sweet malt, definitely German. There was a fruitiness to the aroma, creating an alluring nature within the beer. It is possible this exotic fruitiness was caused by the spicy nature of the saaz hops. Or perhaps it was the perle. Both are so wonderfully spicy.

Savor: bitter and fruity at first, brought on by the delicious hops, and followed by the flavorful sweetness of Munich malts. The aftertaste was slightly bitter and rich with the flavor of grain. The body was smooth, and well balanced in carbonation.

Satisfaction: luscious and highly drinkable. The flavors were strong and enduring, and everything a pilsner-style lager ought to be, the only drawback being its slightly bitter aftertaste.