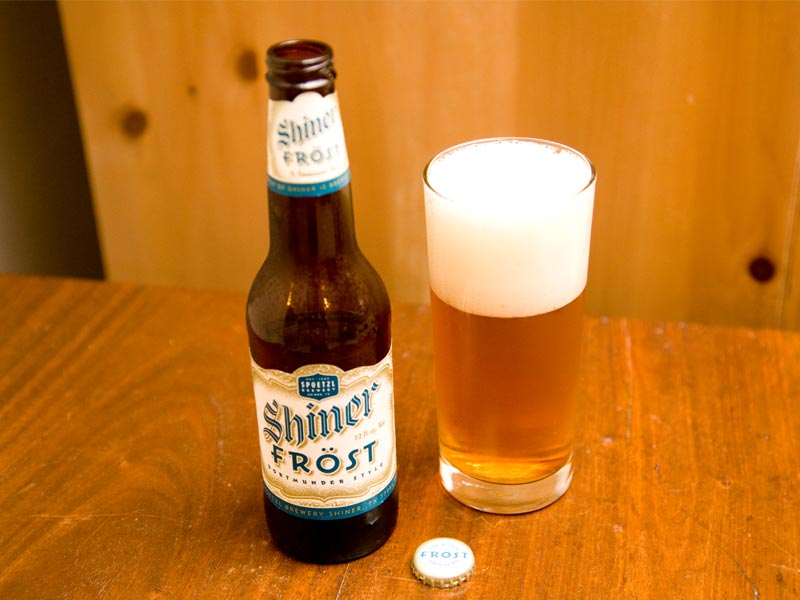 Shiner Fröst is a seasonal, Dortmunder style beer from Spoetzl Brewery in Shiner, Texas. With “the malt profile of a Helles and the hop character of a Pils,” this Dortmunder uses Two-Row malted barley, malted wheat, and Munich malts, along with Hallertau Tradition and Spalter Select hops. ABV is 5.5%. The following is our team beer review:

Michael: Until now, I had never had a dortmunder-style beer. At least not on purpose. This one shone a crystal clear caramel color with a soapy water head. It said to ‘serve cold’ on the bottle and in so doing gave the appearance of a refreshing beer. Nonetheless, it was dry and a bit yeasty. It smelled of an unlikely combination; dirty sox and lemon zest. There was honey there too. It finished again with that usual dryness. While this may not be my style of choice, I thought this beer was decent and wouldn’t turn one down. Grade: B

Tom: I enjoy a good Dortmunder lager on occasion and Shiner did an okay job replicating this style. The aroma brought with it lighter sweet malts such as Pils, Munich, and Vienna with a hint of toastiness. The hopping was crisp and earthy. What draws me to this beer; 1) the golden color and 2) a more body than a Munich lager. There was a slight metallic taste, but overall I was left with an herbal bitterness and some sweet malt on my palate. It was not an amazing brew and did disappoint me somewhat. Good not great. Grade: C+

Noel: I feel as though Shiner is known for mostly brewing average beer. It’s a shame, then, that Shiner Frost is only a seasonal brew (and somewhat strange that it’s a winter seasonal, given the style). But no matter, this is an incredibly sessionable beer, as good Dortmunders should be; crisp, refreshing, and oh so well-balanced. Clean, light caramelly malt fades into a nice spicy, earthy touch from the hops. The first few sips even have a slight metallic or mineral tinge…which is actually true to the style. A word of advice as well: don’t drink it straight out of the fridge. Despite the name, I think it’s near perfect at around 40-45∞F. If you can, pick some up and save it for a sweltering summer day. Grade: A-

Taylor: After loving Shiner’s Bohemian Black Lager (Schwarzbier) as the first Shiner beer I ever had, I promptly fell out of love with the Texas brewery because the rest of their lineup is in my opinion batting well below .300. Fröst comes along, however, and restores a little bit of dignity. I really like the color and design of the label. Pours caramel, smells crisp, malty, which a little hop spice. I’m not an expert on Dortmunders but I hear they’re favored in the warmer months, so it is a little strange that this one is a winter seasonal. As for the taste: refreshing, lightly malted, with a hop second half. Very good until the finish, which was for me incredibly metallic. What is with that? It really detracted from the enjoyment. Maybe I had a bad bottle? Grade: B-

Cyrus: Shiner Frost is a decent seasonal, pilsner-esque beer from Spoetzl Brewery in Shiner, Texas. Although this is not the first “type” of beer that I would choose, I found the taste enjoyable and refreshing. It was a pleasant surprise. With a rapidly-receding head, and copious amounts of carbonation and fizz, I can say this was one of the more refreshing seasonals I’ve had this winter. Up front, I caught a hint of malts and floral-aromas in the hops. Shiner Frost left me with a fruity aftertaste…maybe apricot? Overall, it was worth a try, and I would surely appreciate this beverage fresh from a tap. Grade: C+