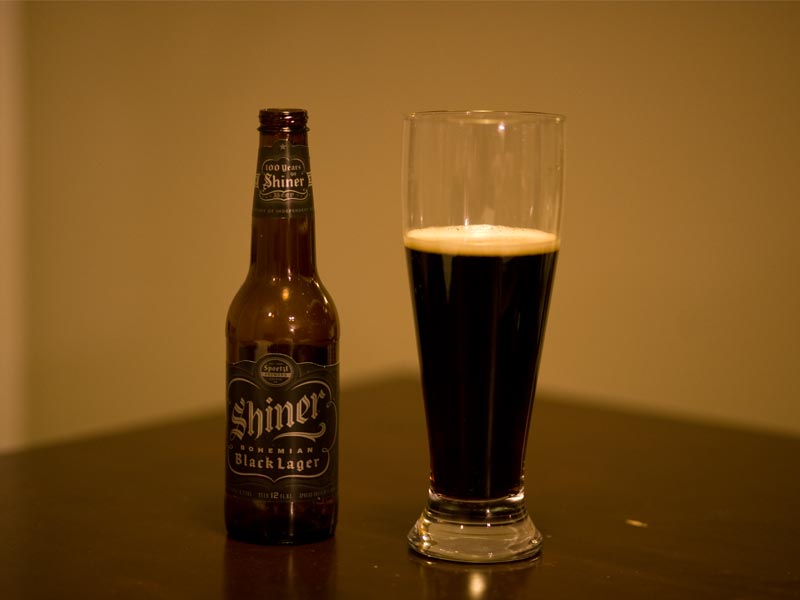 After a long day at work, it’s time to sud up. This weekend I picked up a case of the Shiner Family Reunion (that’s 6 different beers from the Spoetzl Brewery in Shiner, Texas) and selected the Black Lager – a.k.a. schwarzbier – for review number one.

I first had the Black Lager a couple of years ago at the now-defunct Charlie’s Ale House in Warrenville, Illinois. I’m definitely a lager fan, and the idea of a “black lager” sounded mysterious enough for me to try. I wasn’t looking for a full-meal beer, just a brew with some personality that I could drink throughout an evening. Shiner Black Lager hit the mark. It’s officially a Bohemian Black Lager, and they aren’t messing around: it’s dark. The head faded really fast after a careful pour. This beer looks great in a glass, even without the puff.

My layman’s taste buds really rocked on with the Bohemian Black. ABV is 4.9%. It has some rich flavors: very nutty and molasses-y. There is a roasted quality to it, and on top of that probably some chocolate too, but it’s not that sweet. I am not really into super hoppy beers (yet), and the Black Lager is very un-hoppy. I will say that it tastes much fuller on tap than out of the bottle, but goes down clean nonetheless (what does that even mean?), and is not at all filling. I’ve had almost all of Spoetzl’s brews, and I think the Black Lager is the best of its beers. Sipping this beer, I can appear to be cool while still maintaining a blue-collar attitude. And that, my friends, when it comes to beer, is money in the bank.