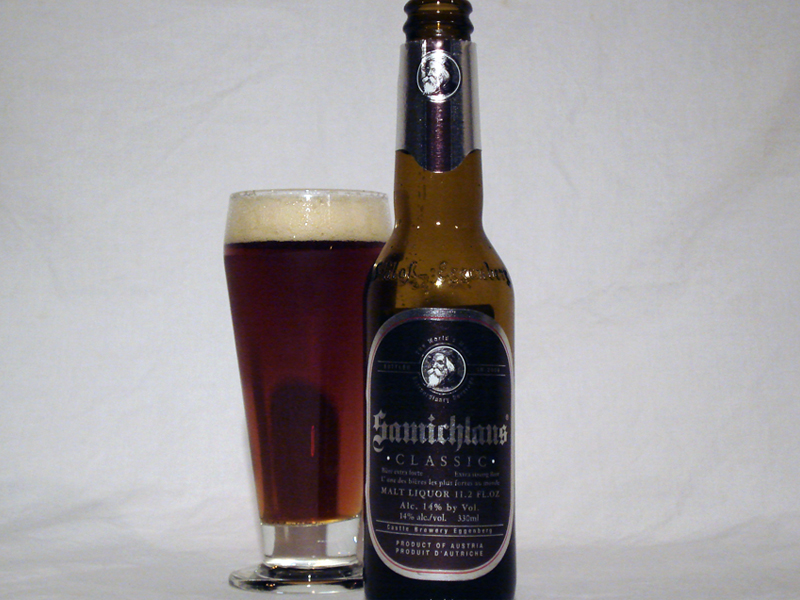 Brewed annually.  Lager yeast.  Its name means Santa Claus. 14% abv. These are just a few facts I picked up before opening this bottle. It has been sitting in my fridge for some time now partly due to the abv. It is not every day that I (or you) might think, “I feel like a 14% lager tonight!” Each batch that is brewed is aged for 10 months before bottling. Mine is a 2009 vintage which mean it could have been brewed in 2008, but not necessarily.

Pouring smooth and clean the head fights its way to the surface where it forms a creamy tan head that settles. The maple syrup color liquid reminds me of a doppelbock, however this beer has legs when swirled around the glass. Clear with golden edges I confident that if presented in a snifter one might think it Bourbon or Whiskey.

The aroma is deep, rich, smooth, malty, and strong. The abv lifts the various qualities while at the same time lending a nice warming sting. Toffee and caramel notes develop as I wafted. It had that classic Marzen/Oktoberfest richness and smooth aspect, but the malt backbone of a doppelbock. Slightly mineral and biscuit-like helped to draw out the lager yeast’s bready quality.

Definitely a digestif or night cap beer. Full bodied, oh-so-smooth, and filling. Like a bock beer, I would consider this liquid bread as it could very well pass for one. Additionally, just like a Bourbon it is to be enjoyed slowly. If you can do it, try to imagine what a Bourbon would taste like after years of maturing, but without the charred oak flavors. If you can separate the two (which is almost blasphemy) you are well on your way to knowing how this beer tastes. The fact that I have a 2 year old bottle allowed some time for the alcohol heat to mellow. Cognac-like and with a minor twinge on the finish. The brewery is correct in suggesting that older vintages become creamy as the mouthfeel was just in fact that.

Enjoyable as a night time sipper during the colder month. Perhaps while you are waiting for Santa to arrive?