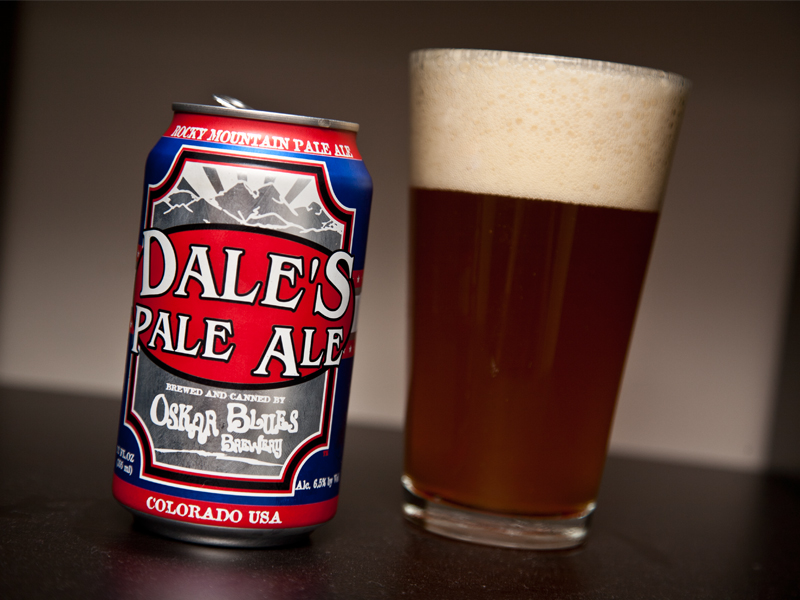 Tom: A flagship beer that was on the cutting edge of the canned craft beer trend in 2002. Dale’s Pale boast being the first craft beer to be canned paving the way an waiting for other breweries to catch up.  Some might argue that this beer has historic value, others cutting edge, yet some will say that the beer inside gives the can its worth. For some reason I can’t help but get a little sentimental about cracking open a beer that helped set a (micro) industry standard.

Well, so far it fits the description of a Pale Ale. Light honey-caramel in color with a creamy beige head this beer reminds me of Dead Guy. When reading their website they say that this is one “voluminously hopped mutha” so as I approached the glass I was not sure if I should be smelling a hopping consistent with and APA or IPA (only furthers my opinion that I think the style line has been blurred in America).

The aroma was pungent, dank, spicy. Not as much of a citrus quality as assumed. More floral and piney than any thing actually. There was a faint malt presence which sent up hints of caramel. You see, there are a few different types of APAs: your East Coast, which tend to be a little closer to the English style bitter; your Midwest, that are relatively well-balanced; your West Coast, which might as well be IPAs; and then your Colorado APAs, which tend to have a different character than the other three.

Dale’s helped me examine this interesting realization. With regards to the taste the hops are right up there in bitterness, yet the flavor is pungent and spicy albeit herbal. The malts are noticeable and substantial lending great sweetness to balance out the resinous hops.  Colorado APA for me are just a hair off from being sessionable. The reason being is that the hops are sticky and resinous drying out your mouth just like Dale’s. Here, the tables tip in favor of hops and no matter that the malts satiate the palate mid sip I am still left with cotton mouth.

So, where do I place Dale’s Pale Ale? I recognize its iconic role in the craft beer scene and place it in the middle of Ska’s Euphoria and Modus Hoperandi.  Grade: A-

Taylor: I love canned beer, and have been really happy with all of the great craft breweries that have adopted canning as a packaging solution. Canned craft beer is cool … huge flavors packed inside a little can. There’s something powerful about that. Dale’s Pale Ale is no slouch. As the first every canned craft beer, it’s already a winner. I honestly think it deserves some credit, and should be at least mentioned in the same conversation as Anchor Steam and Sierra Nevada Pale Ale. I’ve had Dale’s in a glass, and straight out of the can, and to be honest, I prefer the latter. It makes this otherwise balanced American Pale seem a little more hoppy. Dale’s Pale Ale smells and tastes wonderfully resinous, and has a great malt backbone to even out the bitterness. I really enjoyed it. Grade: A