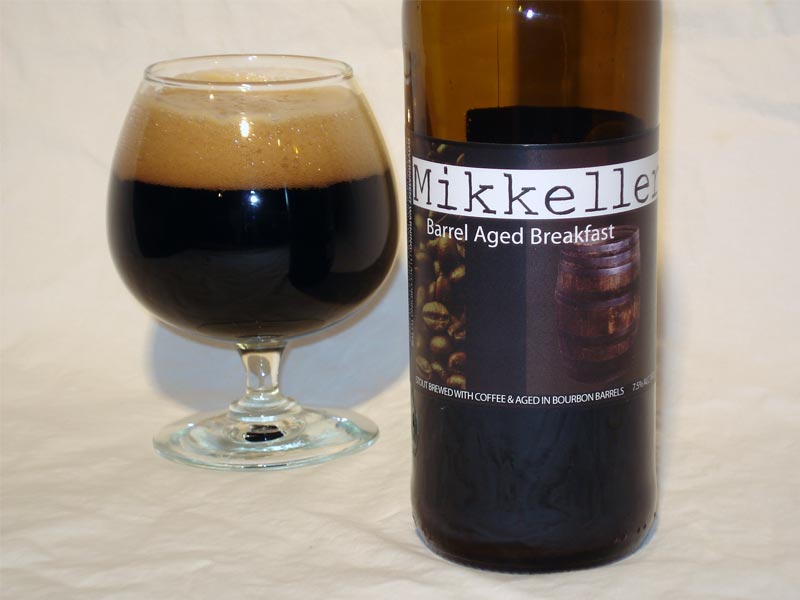 Aging this beer for over a year I would put forth the argument that one should not do so for more than six months.  Oh sure, it is aged in Bourbon barrels, but after all the abv is not “imperial” strength.  If I had aged this any longer I could see it turning soy sauce.

Due to the extended aging it tasted and smelled very similar to the original beer geek breakfast.  It had some deeper caramel flavors and a slight vanilla root beer aspect, but much classic Bourbon-like qualities…at least with regards to the booziness.  The oak aging definitely mellowed out the coffee and turned it into a more astringent brunt grain character.  Chocolate notes were more bakers dark chocolate and did remain on the palate for too long.

The nose was muted with great roasted grain notes, chocolate, and rum covered fruits dipped in chocolate.  As it warmed a very faint boozy warmth did rise.  There were some earthy herbal aromas that balanced the wood sugars and caramel hints.

Nothing too fancy.  I think the point of this variation was to see how the Bourbon and oak would effect the strong coffee flavors.  Towards the end of the glass highlighted notes of caramel and charred wood did present themselves delicately.  I was expecting a little more wood character, but I found the amount to fit the beer well.  After all, it is not a boozy imperial beer.  The Bourbon did add some deeper richer flavors while the wood helped to round out the edges so I guess you could say the barrel did its job.  I think this beer would have aged better and tasted a little more complex if the abv was higher before going into the barrel.  The mouthfeel was still slick and oily, but the oak helped to thin it out and lend a slightly drier finish.

I would like to try this one fresh to compare the difference.  The coffee would be more pronounced and hopefully the Bourbon too.  Until, then this was just a tab better than the original.