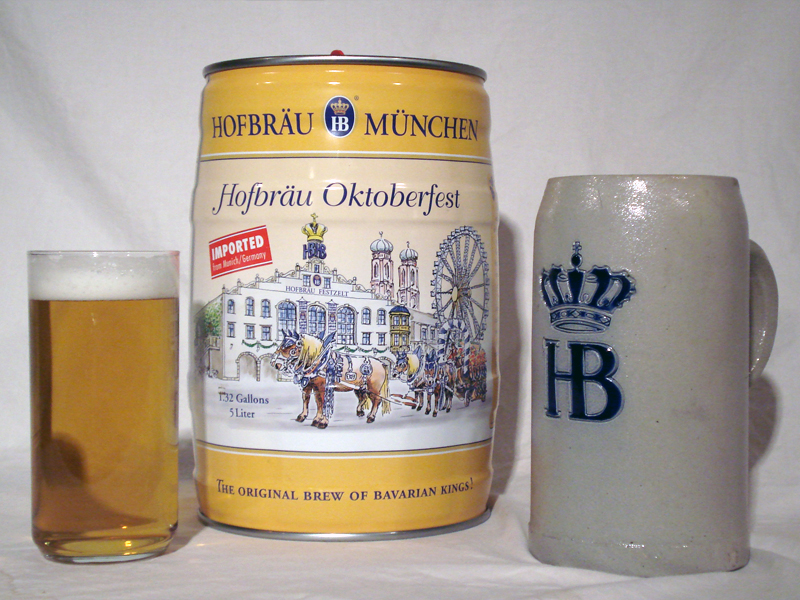 Hofbrau! A powerhouse of brewing in Germany has been reaching the masses for centuries over. Founded in 1589, it used to be the royal brewery (hence the crown in the logo) for the Bavarian “court” (Hof).  Known for its massive Oktoberfest celebration, frauleins, Liter steins, and lederhosen this beer is a classic for the season.  I found the labeled beer porcelain mug at an antique shop for pretty cheap.  Made in Germany and showing signs of good use, I can only imagine that it was hoisted in a few Oktoberfests abroad.

The color of this brew is a deep gold with hints of some light straw hues like the Original.  The head was creamy, off-white, and laced the entire glass.  Serving from the 5 Liter mini keg, I filled me stein up and prepared for a Liter of goodness.

Forget reviewing this beer!  I dove right in and quenched my thirst for some Oktoberfest/Marzen beer.  Nose deep in foam, I enjoyed the smooth cold beverage until about 3/4 of the glass was gone.  What fun!  It was extremely refreshing and made my day.  Filling the stein back up I began to be a little more critical (with intermittent stops to repeat the fun of course).

The aroma is mineral, sweet bready malts, light caramel hints, and a grassy hop aroma.  Now, the style is brewed with lager yeast, but if I’m sure this said it was an ale (same as their original which tastes like a German lager).  Given that, it smelled pretty smooth and crisp.  There was not too much caramel or Munich malt noticeable on the nose as this is probably the lightest Marzen I’ve sampled.

Based on my previously mentioned enjoyment, it should be notes that this beer is highly sessionable and delicious.  The mouthfeel is creamy while the finish is crisp and grassy.  There is just enough caramel-like malt notes to give it some depth while retaining a bready pils overtone.