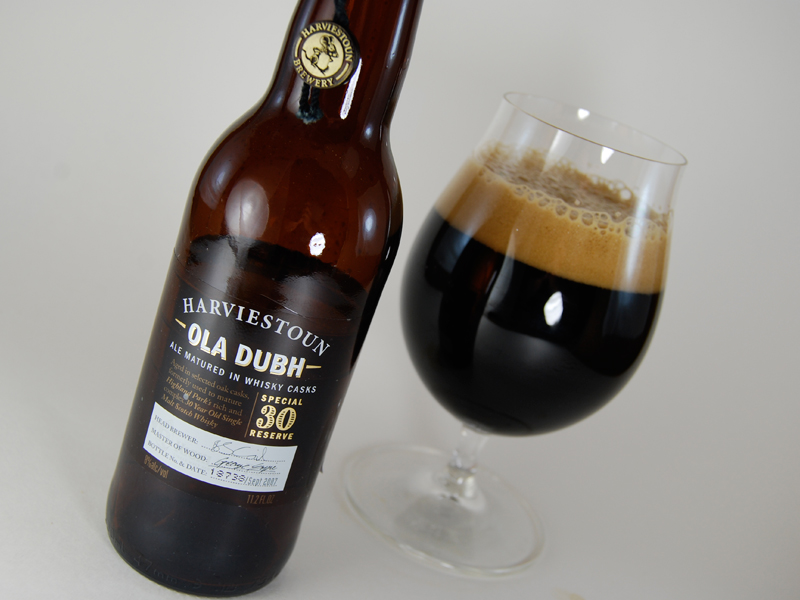 It turned out I was right and five long days later I finally got the chance to partake. A few weeks ago I had the 12 year and enjoyed it immensely. The thirty year, with pricier barrels and a higher price tag itself, was bound to be even better. Pouring an unbelievable black, I was shocked at just how dark it really was and how it went directly from black to tan, on the head, with no blending or gradient of any kind. It was like the two colors had a disagreement and only circumstance had forced them together in m glass. The head settled from its initial two fingers to a layer of light brown, graced with a scattering of bubbles.

The nose. Wow. From the instant the liquid touched the air the scent of whiskey erupted into my nose. It was smooth, powerful and sweet, much as I was in my younger years. There were hints of an earthiness, but ever so slight and an equally elegant layer of musty wood chips (ironic and odd as it seems).

My first sip was shocking. That tip toeing wood chip and earthy tones kicked into overdrive. They were so forward initially, I had to ready myself to take another sip and see what other flavors were present. A definite brown sugar like sweetness was a nice introduction, once I had realized what would follow. There was a whisper of soy and then back to wood and whiskey. The finish was a beautiful warming, a perfect accompaniment to yet another rainy April evening in Chicago. If you like whiskey, or earthy, solid beers, this one is definitely a must try. It is well-crafted, big and bold without being obnoxious. The mouthfeel is smooth as can be, but balanced with carbonation enough to not be oppressive. An overall well balanced, thoughtful and artistic beer.