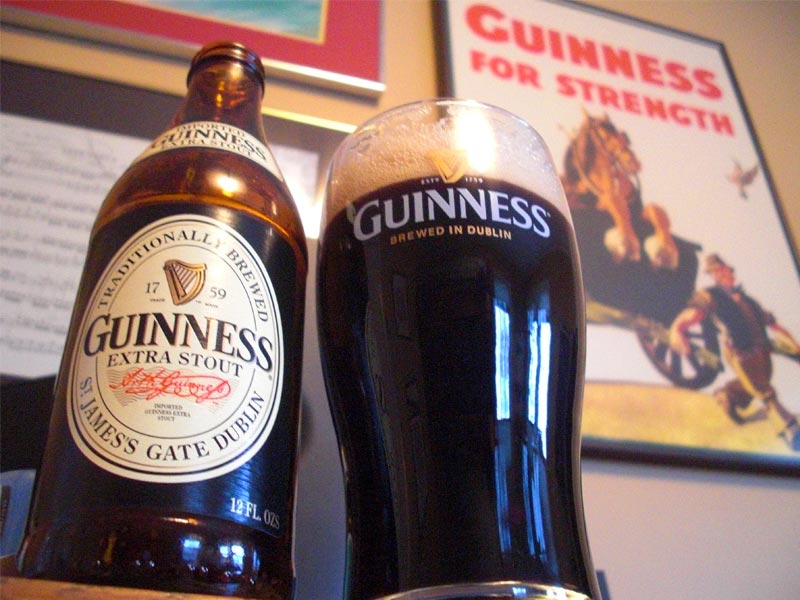 Noel:  To be honest, I’m not sure how many average joes out there know that this beer even exists.  Guinness Draught, not Extra Stout, has become synonymous with the Guinness brand, and it’s not all that surprising considering its availability in just about every pub or bar in the world.  But not many people know that the Draught has only been around since 1959.  The Extra Stout?  Well, if we take Guinness at their word…over 200 years.  Now that’s a long time.  So while it’s fairly obvious that the beer as it exists today is not the exact product that was being served back in 1759, this stuff deserves quite a bit more respect than it gets.

Assuming you’ve had the Draught, what’s in store when you crack open a Guinness Extra Stout is not entirely what you might expect, although it is just as much a unique, one-of-a-kind beer.  No nitrogen widgets here; just good ol’ carbonation.  So yes, there will be bubbles in your Guinness.  Interestingly enough, these carbon dioxide bubbles still create the distinctive “cascading” effect…but it doesn’t last very long, and neither does the head.  A much maltier aroma accompanies the liquid this time around, too, with hints of chocolate and something akin to coffee.  Maybe even an iota of hops.  It’s actually a very pleasant smell.  The color is just a tinge lighter than the Draught…near the edges of the glass you can distinctly tell the beer is actually a dark reddish brown, not black.

Mouthfeel and taste are where the Extra Stout really takes on its own personality, though.  Gone are the familiar silky smooth gulps of the Draught, and replacing it is something with a distinct bite.  It’s heavier bodied (though not a heavy beer), maltier, carbonated, and distinctly more bitter…even sour to a point.  Maybe the closest thing I can compare the aftertaste to is the cold dregs of a strong batch of coffee.  But the added roastiness of the malt is tasty; it’s a much truer Irish dry stout in my opinion.  And don’t let the “Extra” in the name fool you too much; true to Guinness form, it’s hard to tell that what you’re drinking is actually alcoholic.

I found myself thinking this beer would be an easy A if it incorporated one more flavor in the mix…perhaps oatmeal?  Or chocolate?  Or maybe if they oak-aged it?  But I’ll admit that after delving even just a little bit into the world of American craft brewed stouts, I’ve started to expect bigger and bolder flavors in every dark beer…even if they’re from Ireland and have been brewed for over 200 years.  Considering the longevity of this brew and the fact that it has maintained such a unique flavor and character all these years, I think it’s a must try for any stout lover.  Grade: B

Tom:  If you have not read the book “The Search for God and Guinness: A Biography of the Beer that Changed the World” by Stephan Mansfield you should buy it right now and read it immediately.  It is a must read for any beer enthusiast and fan of Guinness…or any humanitarian for that matter.  Packed with the colorful history of Guinness it explains in great detail the inner-workings of the company, people, and beers.  Having gained a greater appreciation for Guinness I felt prepared to enjoy this beer completely.  As Noel described, the carbonation is a little different, but just as billowing.  My glass boasted a fluffy mocha head that laced as I drank the familiar deep brown liquid.  The aroma had a little more of a punch to it than the Draught.  That sour dry smell was apparent (due to the fact that they use an old batch of wort in the boil).  One thing that stuck out to me was that there was a fruitier nose and it was definitely hoppier.  The taste was more astringent albeit bold.  I guess I would say that this beer fits right in between their Draught and Foreign Export in terms of flavor, hoppiness, aroma, and mouthfeel.  I would agree with Noel, this is a historic beer well deserving of some attention.  Grade: B