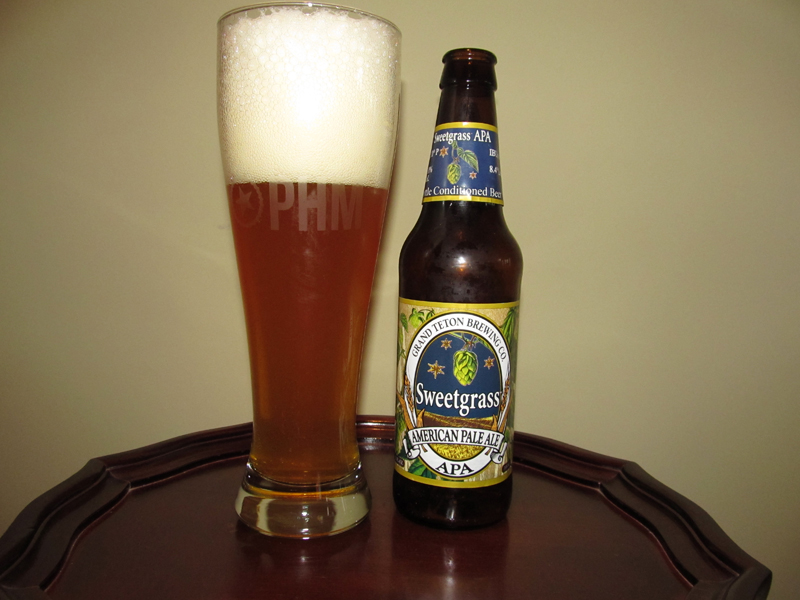 John:  I was looking for a nice beer to share with some buddies and knew that Grand Teton would give the quality I was looking for. I hadn’t tried their APA so a six pack was the way to go. It poured a cloudy amber with lots of effervescence. The lacy, big head lasted about 1/3 of the time it took me to drink this brew. Nice hints of fruit and yeast to start the session. Some hops came later. This hits me as a really refreshing beer. Nice and light, fruity and orange with some hops and a slight alcohol finish. The mouthfeel is thin but still quality. It’s not a beer I’d save up for but when looking for a nice, light sessionable I’d do it again. Sweetgrass is worth putting on your “to drink” list. The day after I bought this I went to a local drinking hole in St. Paul called The Happy Gnome. I noticed they had it on draft so took that as an affirmation of the quality of Grand Teton’s Sweetgrass.  Grade: B

Tom:  A 2009 Gold medal winner at GABF this deserves some respect.  Having enjoyed a few six packs of this brew I can say it is one of the best I had.  Just the right amount of malt and a great hop profile.  Hops like Columbus and Galena are high in bittering acids so one would think that the hops would overpower in this brew, but they are incorporated well.  It is dry-hopped with Cascade which provides that floral, minor citrus nose.  The Amarillo hops used do lend a brighter citrus quality, but I much say the hops show up more in the taste than the aroma (which is pretty well balanced).  Malts flavors are that of caramel and a light toasty biscuit character that carry the beer into the back half where a more resinous hop quality is present.  Sweetgrass is a sessionable beer with a little more body than most APAs.  It is bottle conditioned so the carbonation adds a little life to the hop bitterness.  Grade: A