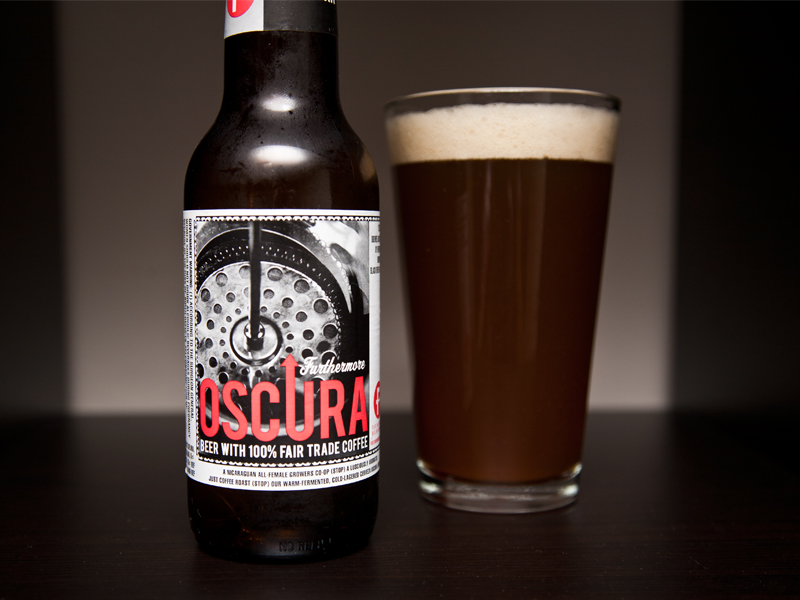 Taylor:  When I was handed 2 bottles of Furthermore Oscura, I did not fully understand what I possessed. I had never heard of the brewer (Furthermore operates out of Wisconsin as a wholesaler, brews its lineup with Sand Creek’s equipment, and distributes in Minnesota and Wisconsin exclusively). I put the bottles in my beer fridge and went about my business.

Furthermore Oscura is a coffee beer. But not the coffee beer you think you know. According to its maker, Furthermore is “more ‘iced coffee’ than ‘double-mocha-mud’, more ‘summer quencher’ than ‘winter warmer’.” We are not talking about a coffee porter or stout. We are talking about a 5.3% ABV, 37 IBU brown Mexican lager. But wait, there’s more: Oscura’s lager yeasts are brewed at “extra warm” temperatures, just like a California Common, or steam beer. Flaked maize is added for creaminess, and whole coffee beans are added to every batch during cold fermentation. It’s true, you’ve never heard of a beer like Furthermore Oscura. It’s a lager at heart, but one that has been seriously overhauled. This is creative brewing at its best.

Oscura’s label bears the image of a French press, with big block letters in red. You expect this to be a bold, heavy beer, but you can tell by looking through the bottle that there’s no inky liquid inside: instead it’s a translucent brown. What? It pours into the pint glass and develops a slight head with large bubbles, just like a lager. This light tan head diminishes to nothing in a minute or so. The roasted coffee fumes coming off of it are ridiculous. French press, indeed. You’ll smell nothing but fresh Nicaraguan coffee here.

One thing I appreciate about Furthermore is that they’ve done a good job of explaining Oscura. I’m grateful for that because it’s unique and curious; being educated about it makes the enjoyment possible. I’ve had lagers, and I’ve had coffee beers, but never a cold-lagered coffee beer. I was sold after the first sip. Oscura is medium-light in body, with that same bright carbonation and crispness you’d expect from a lager. But man does this beer boast coffee. You will be hard-pressed to find another beer that is so acutely focused on that coffee taste. Hops have been added to try and balance the sweetness of the un-brewed coffee … but you’ll not be able to pick them out. They are deep in the background in a total supporting role. Oscura is not thick like a coffee stout. Instead it is bright and focused, balanced in sweetness, and massive in its coffee presence. What a great beer this is. What a way to take an uninteresting Mexican lager and make it sing.

Thanks to visionary brewer and owner Aran Madden for this gem!  Grade: A

Tom:  Browsing the selection of Furthermore beers that stared back at me I carefully selected Oscura for its label and interest as to how the coffee would be infused into the beer.  Upon my return home and a quick glance at the website it was time to partake.  I noted that the base recipe was close to a “brown Mexican lager” so I was expecting something akin to a Vienna Lager like Negra Modelo.  The overall experience I had while sipping this brew can only be summed up in a few one word phrases.   There was the occasional, “Daaaaaaaaamn! Oh my!  Right on! So good! How did they? Wow!”  The color was hazy and the head creamy just like a cup of French press.  Overall, this beer has smoothness written all over it.  The cold aging perfects the beer and mellows the coffee…and then aids in bringing the two into unity.  Rather than rambling on, just go back and read Taylor’s review.  This is the best example of how coffee should be wed with beer I’ve had to date.  Grade: A