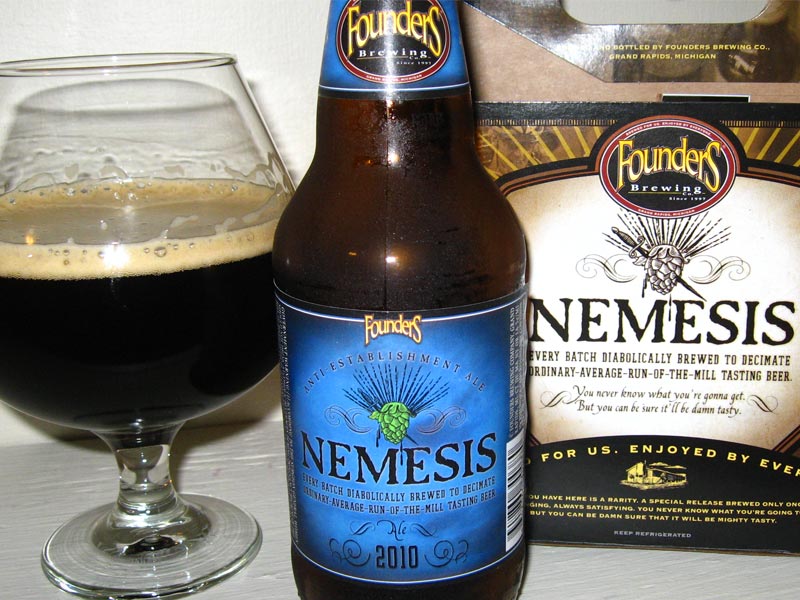 A thunderstorm rolled in just as I prepared to open my bottle of Nemesis purchased two hours earlier. So, before setting up for the picture I ran upstairs and got my head light in case the power went out or I needed to run outside to reposition a downspout. After collecting myself and admiring the sweet label art I broke the seal.

Emptying the beer into my trusty sifter it looked like a cup of coffee with a deep brown/mahogany body and ruby undertones. The head was a light beige color that fizzed up nicely, but then faded rather quickly.

The bottle reads, “Every batch diabolically brewed to decimate ordinary-average-run-of-the-mill tasting beer.” I’d say this is true for the aroma as well. One whiff of this beer and I was met with a plethora of interesting notes. Deep rich fruits, plums, dates, figs, grapes, raisins, peppery, sweet, dark caramel, roasted grains, molasses, light chocolate, high alcohol (more so as it warms), toasted bread, woody, tannins, oak, floral hops, spicy, piney, and a slight hint of butterscotch (maybe that is toffee).

From what I can gather the brew is different from year to year according to Founders who states, “You never know what you’re gonna get, but you can be sure it’ll be damn tasty.” This 2010 vintage comes in at 100 IBUs and 12% ABV so you know your taste buds are in for a real treat. At least they better be at $6.00 a bottle.

Despite its daunting name, it is actually pretty smooth. The tastes I picked out were varied as I found myself selecting flavors that are common in other styles. Hopefully this breakdown might help summarize my thoughts.

It had a medium body and semi-chewy mouthfeel. While being a big beer the ingredients blend well together. The aftertaste leans more towards the darker malt side, but that is only after you’ve enjoyed a hoppy, boozy, (oaky?) finish. I feel one could probably call this a number of things Imperial Brown Ale, Black IPA, American Strong Ale, or Barleywine.  A rather interesting beer that I found needs no classification…simply enjoy it as a unique non-conforming beer it was brewed to be.

2012 Revisit:  I opened up another bottle (my last) in January of 2012.  Partly because I wanted to enjoy a beer that I did not have to write up an original review and mainly, because I had it and was curious to see what it tasted like a year later.  Yeah…I could have aged it longer or sold it on ebay, but I decided to indulge myself.  I poured like a Brown Ale or Brown Porter, but the flavor and aroma are both huge even still.  Smelling like a hoppy black barleywine (think Sierra Nevada’s Jack and Ken’s Ale) this beer will not disappoint.  It offered some imperial notes,but the abv seemed rather muted for being 12%.  At 100 IBUs, this beer was full of hops which added a Black IPA  body.  The mouthfeel was moderate, but towards the finish the resinous hops and astringent malt laid down a thick palate coating sensation.  If you can acquire a bottle I would recommend doing so.  It is a shame this was the last batch of Nemesis brewed.