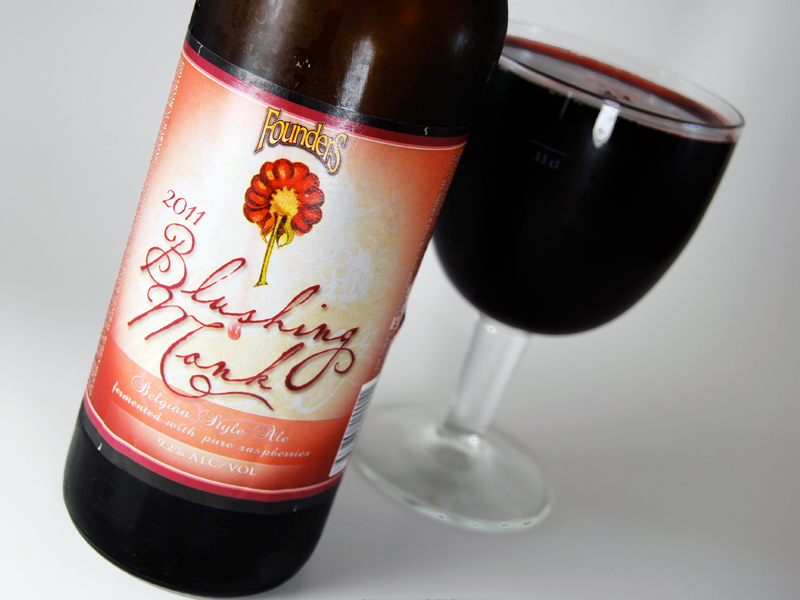 Michael:  I used to be into wine. I thought those days were over, until I poured Founders “Belgian Style Ale fermented with pure raspberries.” I have never had anything by Founders that wasn’t good and so I had saved this limited release for several weeks, waiting for the right moment to indulge in what was bound to be, with this slightly ‘out there’ style, a pleasant surprise.

It pours like a grape juice cocktail, all fizzy and purple and a rim of foam across the top, a bright, almost unnatural magenta. It seems Founders must have used an artificial dye in this one, a few drops at least, to make it pop with color like it does. But no indeed, I guess that’s just what a bunch of fermenting raspberries do.

It smelled incredibly sweet, definitely fruity and reminded me of another big fruit beer I had recently had, Raspberry Tart by New Glarus. Founders version, however, was even deeper in color and more bold in scent. The raspberries were definitely present, but like they had been soaked in sugar and candied. The sip was wonderful. The body was bigger, more full and more smooth than I would have suspected. It slid down my throat easily, despite the slightly fizzy edges and slightly sour aftertaste. That sour lingered, coated and beckoned me to take sips number two, three and four, attempting to quench the unquenchable. But I didn’t stop trying. It was rich and solid, without too many nuances or complexities it was just a great raspberry brew. The folks at Founders knew exactly what they were going for on this one and in my book, hit it right on the head.  Grade: A

Tom:  My encounter with this beer came during a Founders tap take over at a local bar.  Before requesting this beer, I had sampled CBS and Black Biscuit so my palate was use to the roasted malt complexities.  Nonetheless I was determined to sample beers I could not get on a regular basis.  While the bottle does read an abv of 9.2%, the draft version clocks in at 12.3%.  Honestly, I’m not exactly sure what the difference is.  Maybe the keg has more volume for a secondary fermentation to take place or the bar wrote down the number.  Either way, the alcohol content was not an issue as it took a station wagon back seat.

Similar to Michael’s pour there was no head on my beer.  I was expecting something akin to Lindeman’s Framboise (which has an ample head), but no…there was nothing.  I did notice a moderate carbonation rising from the glass that ended up looking like a champagne.  The color was dark blood-ruby red.  It literally looked like raspberry or grape jelly.  The aroma was straight up raspberries.  Jammy and sugary.  No hint of alcohol on the nose.

The taste was a little too sweet like New Glarus’ Belgian Red Ale.  It did taste fresh and jammy all the way through the each sip.  Like I had just lathered on a dollop of raspberry preserves, jam, or jelly.  There was a slight tart prick, but nowhere near sour.  Essentially, it tastes like a Belgian Blond ale that had a fair amount of raspberry grenadine put in it.  A little too sugary for me.  I could see this as a nice aperitif if served in small portions or poured over vanilla ice cream for dessert.  Grade:  B