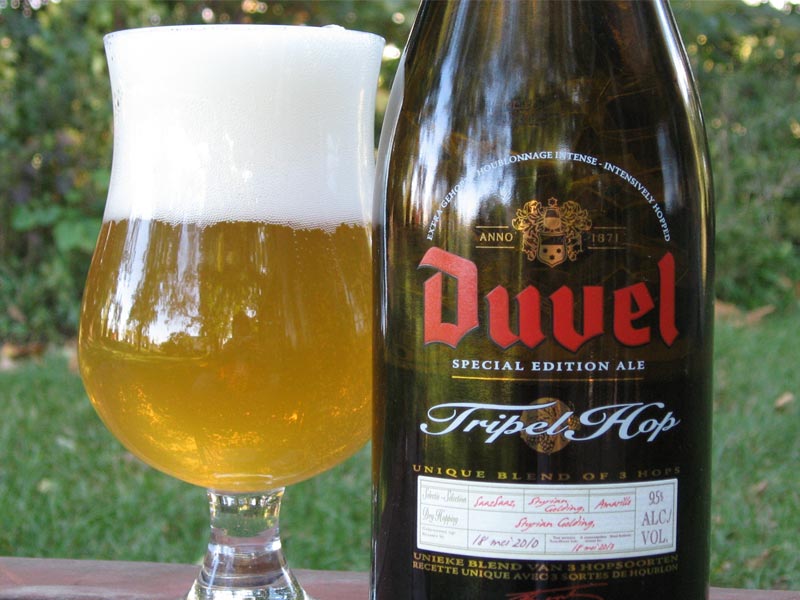 Upon receiving my email for recently arrived beer from my local Binny’s I made it a point to stop in for this brew. It seems the “triple hops brewed” marketing worked to a certain degree (unfortunately for Miller it had the opposite effect…suckas). As you can see in the picture, there is nice label that was made to look as though it was hand written with all the info on it.

The hop selections used include Saaz, Styrian Goldings, and Amarillo for the boil. It was then dry hopped with Styrian Goldings. Brewed on May 18, 2010 this bottle has a best by expiration of 3 years to the date. It weighs in at a measly 9.5% abv.

Cork and caged with a decorative wrapping this special edition brew has a similar appearance as its generic relative. A hazy golden-sunshine hue with a billowing egg shell while head that looked like the top of a lemon marainge pie.

Contrary to the original Duvel, the hops do not get lost behind the yeast, but rather stand out in a big way. They still help to retain an earthy, spicy, herbal, floral aspect to the beer, however there is much more pronounced, crisp, and clean. The abv provides some muscle as it is a little hot on the nose. Sweet light malt notes give some depth as the yeast is still an ever-present part of the aroma.

My first sip was hoppy and glorious. After about half a glass I got used to the taste and other features started to come more vividly. The bitterness was that of a grassy, lemon, herbal character with a somewhat noble finish. Like a fresh Pilsner the Saaz combined with the Styrian Goldings to create that fresh earthy component while the Amarillo gave a minor citrus flare. The yeast was bold and vibrant with a bready, spicy notes and a faint sour finish. Champaign-like carbonation yielded a bubbly mouthfeel that was lively and happening.

I preferred this rendition over the original and green Duvel beers. The hops blend with the yeast making for a very energetic Belgian brew.