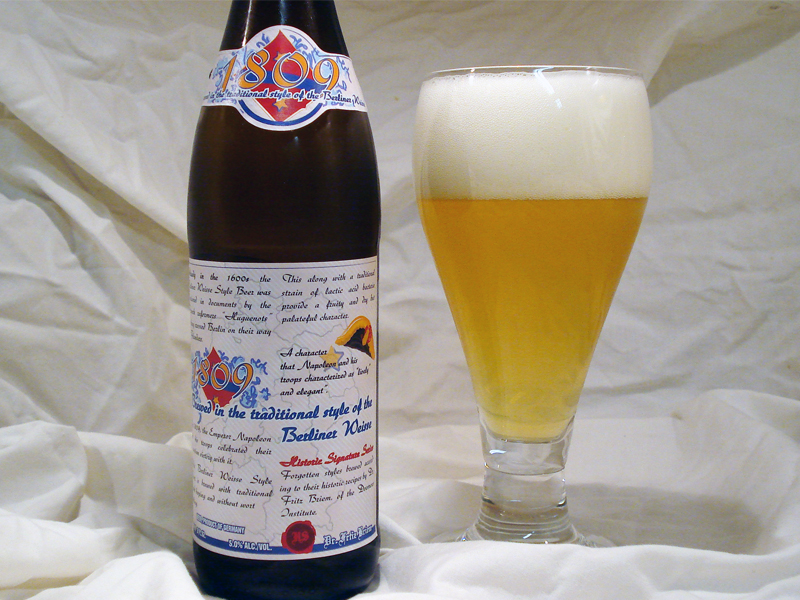 I have heard and read of this sour beer for some time now, but finally got up the gumption to buy a bottle of 1809. This beer was brewed in an attempt to recreate a nearly extinct style that was unique to Berlin Germany. According to the bottle, Napoleon and his troops dubbed the Berliner Weisse as the “champagne of beer” after their conquest of Prussia.

This beer surprised me many times over. First, the brewing method was simple. No boiling of the wort is done and hops are added to the mash (soaking grains). Second, an interesting strain of yeast called Lactobacillus (lactic acid) is used during fermentation to impart a sour/tart component.

Lastly, the finished product introduced me to a wonderful beer that I will not keep stocked in my fridge. The appearance was lighter than an American wheat beer with the similar hazy, cloudy, straw yellow-golden body. The head was fizzy and pure white. It built up to a nice plume, but quickly diminished to a film that was sustained by the carbonation below.

My nose registered the tart yeast immediately as the aroma had a bite to it at first. Very effervescent and fruity, it possessed similar notes of banana and clove common to Hefes but on a lighter side. There is a strong bready aroma due to the wheat. Aromatic notes of lemon make this almost tea-like. For the most part I say it is clean and zesty.

Hello taste buds!!! This is a crazy delicious beer. Great for the hot summer months, this beer is super refreshing. It has a lighter mouthfeel than your typical wheat beer and the sour/tart notes combine with the carbonation to make it a bubbly vibrant beverage. It starts with a lemon non puckering sourness that progresses into a light bodied wheat, hay, straw middle. The lactic acid is strongest on the tip and sides of the tongue giving this beer a unique dynamic. Additional notes of lemon grass, limeade, and sour patch kids round out the finish…which is dry and citrusy. Minor tart notes highlight a hay/straw aftertaste.