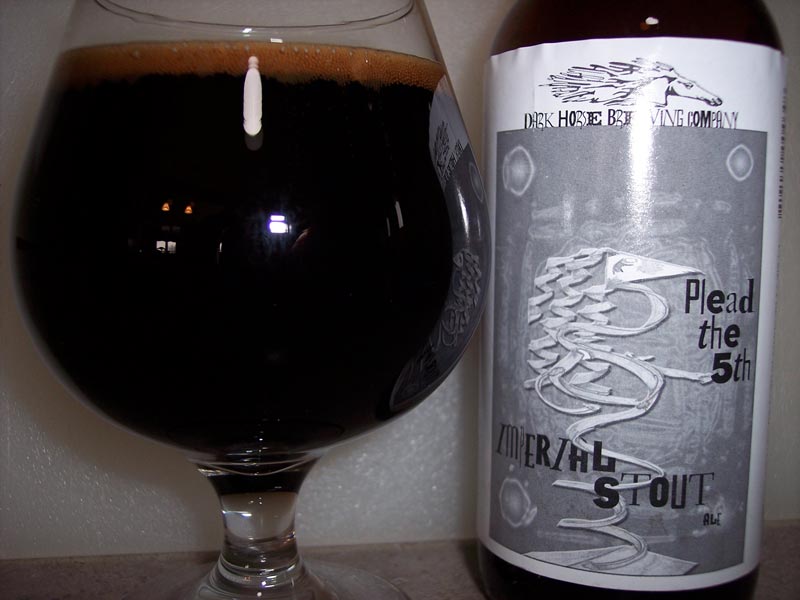 John: Beer riddle – what pours like motor oil, smells like chocolate, chews like thin taffy and tingles like alka seltzer? Plead the Fifth Imperial Stout is the answer. This is a nice stout. I took a double take when I poured this brew. It was thick and rich looking. Almost saying “Welcome to drinking a good stout”.  The head was a rich brown but didn’t last long. The aroma was rich chocolate and a hint of vanilla. The taste was like the smell. Here’s how it came to me–rich chocolate, a note of orange, a chewy mouthfeel and a alcohol tingle on the way down. As it got warmer (I started out around 60 degrees) raisins and burnt malt began to emerge and the alcohol quieted down. At room temperature this was a full, smooth, deeply satisfying imperial stout. If you are patient you’ll experience a great flavor. Pleading the fifth normally applies to avoiding association truth. Don’t plead the fifth on this one. It is worth saying you’ve enjoyed this beer from the Dark Horse Brewery. If you are a stout fan I think you’ll be pleased. Grade: A-

Michael: I’m not sure why Dark Horse won’t talk. Invoking the Fifth Amendment seems unnecessary here, as the ultimate crime of making a bad brew is far from this one’s possible deviances. It pours a thick-as-oil black and oozes out of the bottle with just the same color. There’s a dark brown head, the only part of the disguise that reveals its not actually something just drained from your car’s engine. There were faint scents of chocolate, nothing out of the ordinary, but present in good doses, along with a burnt flavor, not quite coffee. The chocolate continued in the flavor, but became darker and more bitter, like the 80% cocoa bars you see at the checkout counter. It had layers of fruit, but none very sweet, emphasizing a rich heaviness. It was incredibly well balanced with a middle-of-the-road smoothness. It went down all too easy, the alcohol hiding in the bitter chocolate and slight vanilla notes. Maybe that’s where the guilt lies, masking the 12% alcohol so well it’s got to be a crime. A well crafted stout and one worth adding to any beer lover’s list. Grade: A-