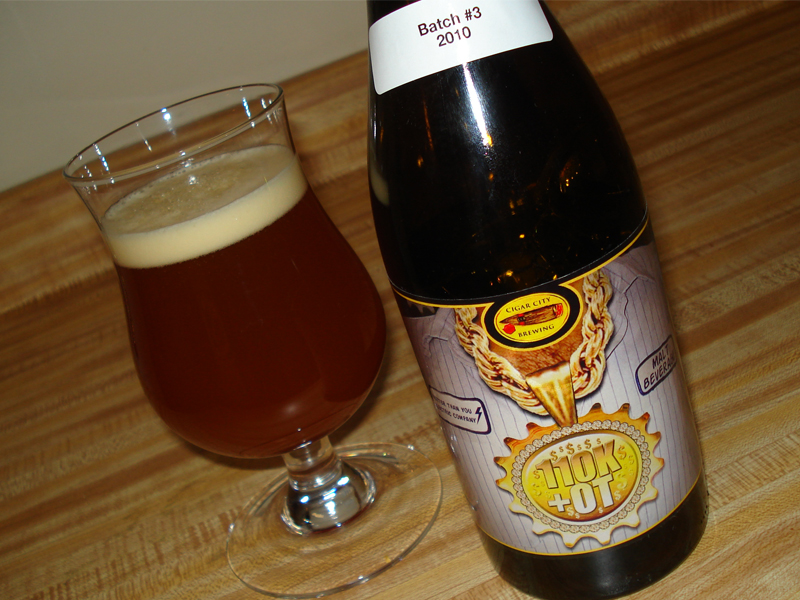 Tom: This is a working man’s/woman’s brew that has character and not for the faint of heart. Special thanks to my beer friend Amie for hooking me up with this interesting Double IPA (Batch #3 in 2010). It is brewed with Florida honey which is evident by the color. It is capped by a yellowish tinted head that slowly developed like a glass of Guinness. Everything about this beer is thick (appearance, smell, taste and mouthfeel).

At first sniff, I did not believe this to be a double IPA as the aromas were super sweet and floral. Honey based this brew also hand hints of malt extract and is rather musty. The smell lingers and has a hazy kind of quality to it. Notes of honeysuckle are present and the hops to come forward adding a peach, apricot, and pear fruitiness. There is a minor abv warmth covered by a light orange citrus layer.

A few sips into this brew I noticed that the malt base if very hefty and the additions of honey makes for a very sweet brew. The hops do not smack you across the face, but rather support what is going on elsewhere in the brew. Three quarters of the way done with my glass my palate got use to the sweetness and started picking up more of the hoppy goodness.

The mouthfeel is heavy as residual sugars coated my palate and syrupy honey notes dominated each sip. Malt and honey win the battle over this brew. The abv is noticeable in the finish with dank hops round out the brew. It sort of reminded me of Avery’s DuganA IPA. Floral, sticky, and unique are what I’d write in my cliff notes.

Taylor: I spoke with Cigar City’s brewmaster about this beer, and he said it was intended as an American Double IPA but didn’t turn out they way they wanted … became more of a Strong Honey Ale. They used Florida Orange Blossom honey and Citra hops to harness the essence of Florida, but went a little heavy on the honey. They liked the way the malt character and honey taste together in the beer but consider it more of a failure in the Double IPA category. It was nice to hear from Cigar City on this brew … props to them and their operation!