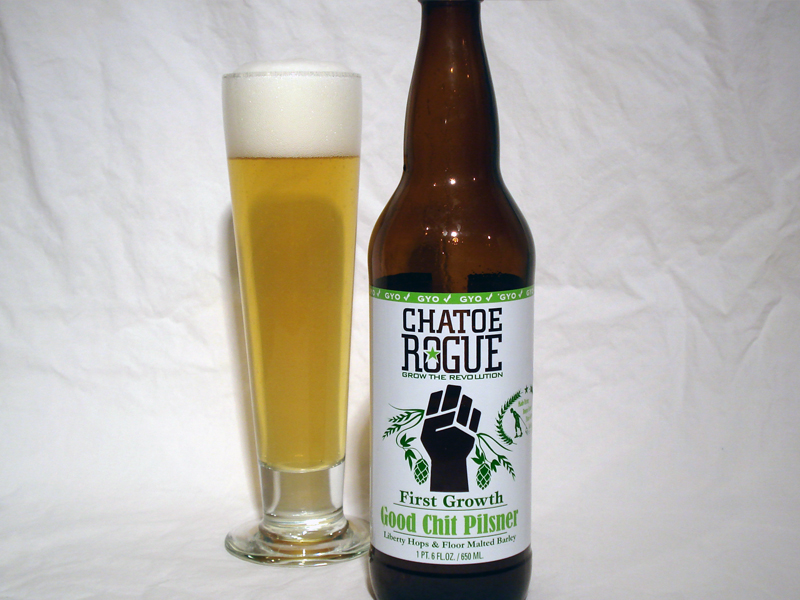 If you have had Rogue’s Irish Lager and enjoyed it then you’ll like this one.  It has a similar taste and aroma to that of Avery’s Joe’s Pils making it a great American rendition of a Czech Pils.  This latest installment of their GYO series used malt that is grown and kilned by Rogue itself.  The use of the term “chit” comes from the name of the rootlets that begin to sprout from the grain during germination.  I appreciated the play on words.

The head retention on this beer is great.  Foamy, frothy, dense and lacing.  It is egg-shell white in color as it rests atop a light hazy straw liquid with supporting bubbles.  The aroma is crisp, floral, herbal, bready, and soft.  This might sound a little contradicting, but the hops are what give it that pop while the malt adds the sweet smooth notes.  It is very aromatic like Avery’s Pils however, here, only Liberty hops are used.  One of the parent flowers is Hallertau  Mittlefruh giving Liberty that spicy, herbal component.

Initially, this beer gave a wonderful salvo of hoppy flavors that were dry at the finish.  For a sessionable Pilsner, I can see why this would be a good beer to enjoy with spicy foods as it cleanses the palate.  Towards the second glass the great bready malt and yeast notes come to the fore.  The bottle says Pacman Yest is used while their website says Czech Pils Wyeast 2278 was used.  Given the fact that the flavor was closer to that of a Czech Pils I’m going with the website.  Spicy on the sides of the palate and slightly resinous on the aftertaste, the hops do make a strong showing in this beer.  The light bready sweet flavors do well to provide a hay, straw, wheat-like base for the hops to shine.  The mouthfeel was smooth and more full bodied than most Pilsners, while retaining a refreshing quality.