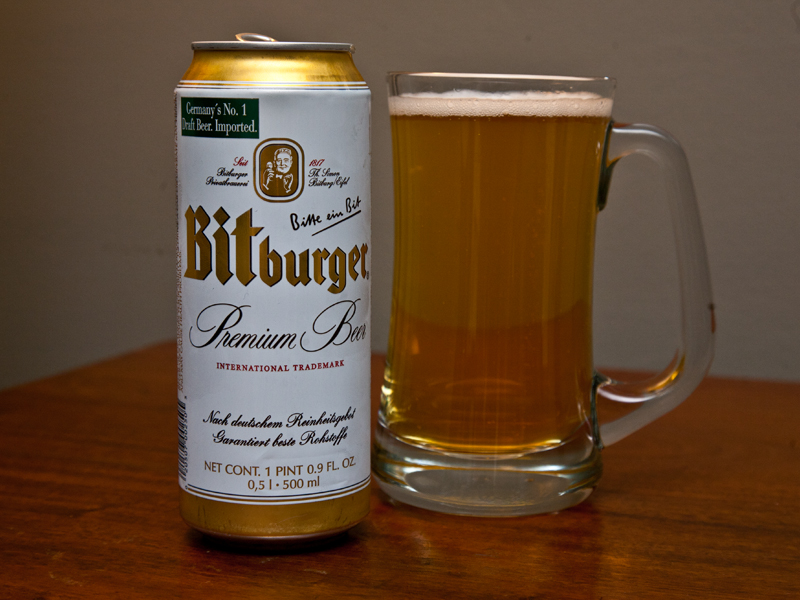 Now that summer weather has officially hit Chicago (80s/90s and sticky), I’ve found myself quaffing some lighter, crisper beers. Nothing in any way wrong with Double IPAs and Imperial Stouts, but when I get home with nothing to show for myself but a sweaty shirt, my parched mouth isn’t thinking about heavily roasted malts and high ABVs.

Pilsner is a style I’ve gotten more into this year. As with any style, there are great pilsners, and there are terrible pilsners. The key is simply putting yourself out there and tracking down a few you like best. I recently returned to this German staple, Bitburger Premium. Bitburger is brewed by Brauerei Bitburger in, you guessed it, Bitburg, Germany … one of the country’s best-selling brewers. I bought mine in a 4-pack of pint cans. Before drinking this one, I put it in the freezer for like 15 minutes. I wanted my Bitburger to be ice cold.

It poured the familiar light straw color into my mug, with enough foam to show me it was well carbonated, but the head dissipated very quickly to a light film on the top of the glass. The nose isn’t very big at all, just some really light maltiness, and to be honest, it actually smells a little like fruit. Grapes, perhaps. But very subtly so.

I’ll be honest again … my first sip was more of a gulp. And that’s okay. This is such a refreshing pilsner that gulps are merited on hot, muggy days. The taste is crisp and balanced, best when served near freezing. Bitburger has none of the skunkiness of other pale lagers. It is a classic example of the German Reinheitsgebot … pure beer, plain and simple. Made from only the best German malts and hops. If you are looking for a great German pilsner, look no further than Bitburger. It is really, really good.