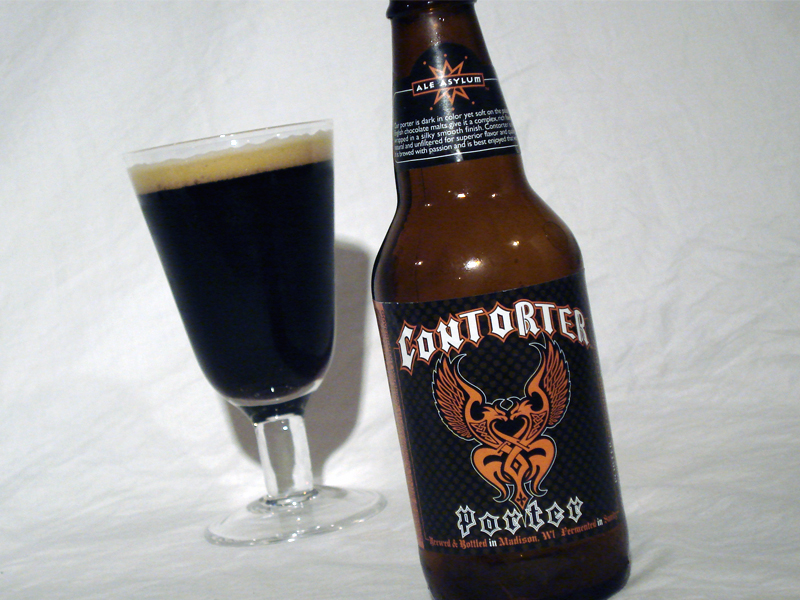 The cool crisp nights are returning here to the Chicagoland area and after a hard day in the office I decided to unwind with a brew fit for just the occasion.  Ale Asylum makes some great beers and this one is no exception.  I bought a six pack of this beer in Wisconsin and drank three of them rather quickly.  If I remember correctly, I had one warm and the other two at cellar temperatures.  The remaining three I laid down for a few months opening one every two months or so.  Since Ale Asylum’s brews are unfiltered I wanted to see if the flavors would develop a little with some time.  The verdict…yes!

While I would not recommend aging a 4.8% abv porter for very long, this beer actually picked up some body and character during its time in a dark box.  Pouring a lovely deep brown-garnet shade it was accented by a beige silk head that did not last too long.  A pretty standard looking porter in my book.

What was really outstanding was the aroma.  Overall, it smelled like a porter: roasty, coffee, etc.  However, when I plunged my nose deeper in I picked up a much more rich and earthy component.  Like a campfire almost.  There was a mineral-like that combined with the bready yeasty that made me thing I was in London enjoying a porter.  There was a excellent charred wood aroma that stood out, yet let the deep roasted grains add to the mix.

The taste was very similar to its sensory cousin.  One thing I noticed in the bottles I aged was a much more full mouthfeel.  Chewy and chocolaty, it was not like a stout, but not as astringent.  The coffee flavors in the middle of each sip were like a rich breakfast blend. The finish was dry and chalky due to the yeast, malts, and mineral quality.  I wholeheartedly enjoyed this porter and would recommend it for these upcoming Fall months.