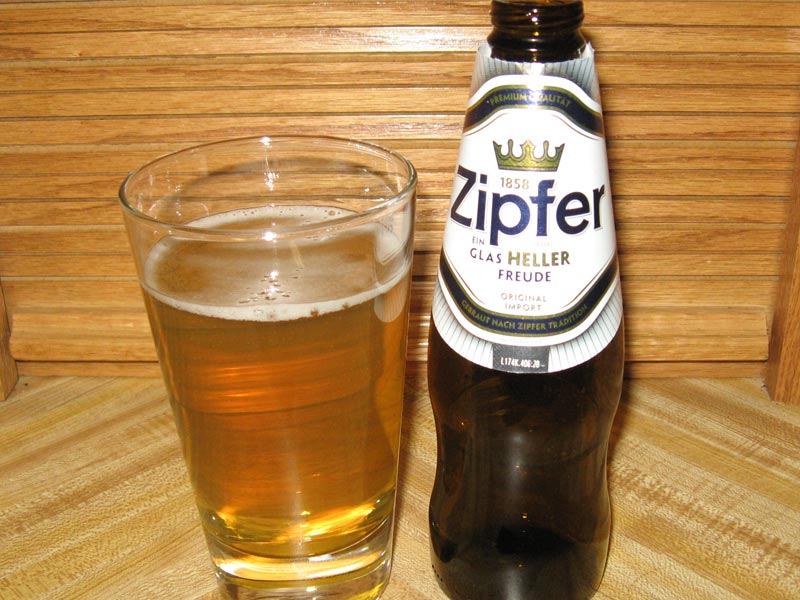 Continuing with the Euro Lagers I direct my attention to a brand called Zipfer. The brewery is located in Upper Austria in the little town of Zipf (makes sense I guess). I went to the distributor’s website and they claim that this is “one of the best beer in Austria (if not the best)” and that “its spicy, fine dry taste already excited generations of beer drinkers, and makes this beer to a timeless flavor experience.” Taken with a grain of salt they might have a point. On the other hand, I find it hard to believe that this is the “best” beer in Austria. That whole region of Southern Germany, Czech, and Austria has produced some great that make this one hard to beat.

Getting down to basics, Zipfer is a light beer that tastes more like a Dortmund or Kolsch-style lager. The head is nonexistent, and the color is that of a clear straw-yellow. There is a light sulfur aroma from the yeast along with some Pilsner malt notes (and possibly corn). I did get an ever-so-faint hint of fruitiness which made me conjure of thoughts of Kolsch beers.

The flavor was straight forward being similar to most Euro lagers. It carried a dryness throughout the sip and left a crisp, spicy finish. I guess the distributor was right! There was a nice blend of hops and light malt usage. My tendency would be to place this closer to a Pilsner, because I think the hops play a larger part in this brew.

Overall, it was somewhat enjoyable and might be good for a summer’s day. The bottle and labeling was pretty sweet and unique. Unfortunately, the beer was average.