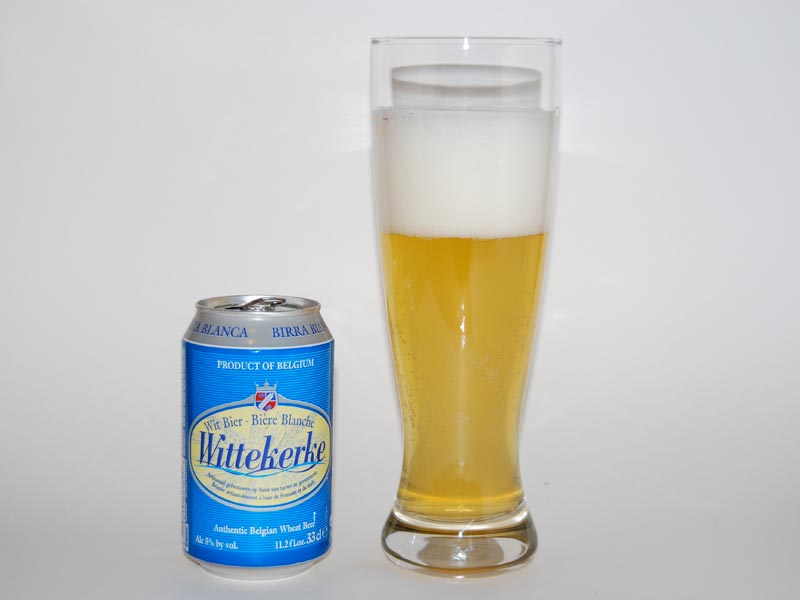 Wittekerke is a Belgian witbier brewed by Brouwerij Bavik (Bavik Brewery). “Wittekerke” is derived from the Flemish “witte” and “kerke,” meaning “white church.” Wittekerke’s local claim to fame is its ties to a popular soap opera on Flemish television, which regards an imaginary small town called Wittekerke. In the show, the local beer served is called Wittekerke. The real-life Wittekerke is one of the more popular witbiers in Belgium. It has an ABV of 5.0%. The following is a Perfectly Happy Man team review – our collective musings, photos, and an averaged final grade:

Tom: I needed a post-work thirst quencher and Wittekerke was at the rescue. At first glance the short, unique can didn’t make me think much of it. After the pour, what the can lacked in height, the aroma and flavor made up for. It looked like a typical Belgian Wit and the aroma was similar with a light orange zest and coriander spice. The wheat and unfiltered yeast gave a pleasant bready character. I did pick up a minor metallic taste, but it was not enough to hinder the overall appreciation. It’s a refreshingly light bodied, easy sipping, palate cleansing beer. Grade: B

Michael: Pouring from a can has become a bit unconventional in my journey through craft beers, but hey, you never know. The lemonade-colored liquid goodness rushed from the can and quickly formed a puffy sponge of a head that clung to the glass. There was a spicy, effervescent smell with layers of pine, bread and citrus. I expected some generously active bubbles of carbonation, but was instead surprised by the flatness of the brew. It had a thin mouthfeel, which made it easy to down, but the citrus seemed too prevalent to make it sessionable. Grade: C+

Taylor: Belgium isn’t necessarily known for their witbier, but Wittekerke is a decent offering. I first had this beer in the signature Wittekerke mini-glass. It pours straw, with a nice white head that dissipates quickly and leaves significant lacing. The nose is not outstanding, you can make out the yeast and a little bit of citrus. Tastes like a lighter witbier, yeast, malt, and citrus notes. The can I drank (that’s right, this beer is mostly found in cans) was a tad metallic. As is the case with a lot of wheat beers, this beer is best in the summer. It is light, extremely drinkable, and definitely flavorful. Grade: B-

Noel: I was pleasantly surprised by this beer, considering I prefer German wheat beers to Belgian ones. It’s incredibly light…maybe the lightest witbier I’ve ever had, and reminded me a bit of Hoegaarden (sans banana). So don’t expect an onslaught of aromas or flavor. But the taste is refreshing: crisp and lemony, with a little sourness at the end (not sure if that’s from the yeast or the wheat malt). Perfect for a hot summer day, and for those who usually pass on witbiers because of their musty banana and clove tones. Grade: B-

Cyrus: Wittekerke is a very drinkable Belgian Wit beer. What is more fascinating to me than the beer itself, is the story behind. This was actually a “prop” beer featured on a Belgian sit-com that aired twice a week in a highly syndicated television program, called (none other than), Wittekerke. In the show, the actors drank Wittekerke beer. With a boost in popularity from the show, this Belgian Wit has since become one of the best selling Wit beers in Belgium. About the beer: wheat based, hints of lemon/grass, fairly hoppy, pours cloudy (traditional of Belgian Wits because they are unfiltered). This is very much a beer to drink on a hot summer day, refilling your stash while heading into the back nine. Fore! Grade: B