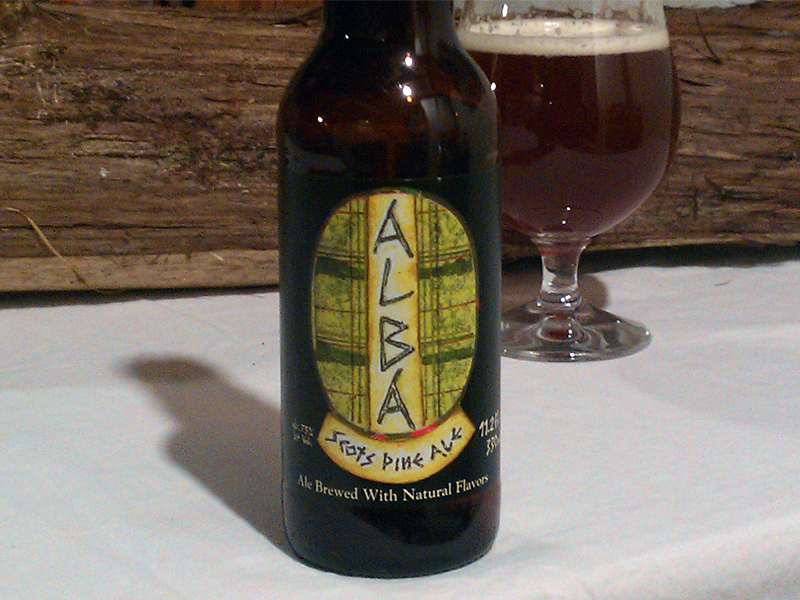 This historic brew commemorates a practice that dates back to a time before hops were used.  Implementing what mother nature gave them, Norse people groups used the sprigs of spruce and pine trees as the bittering agent in their beers. Through the vehicle of Viking conquest the people groups in Northern Scotland started to incorporate this brewing method to great acclaim.  I came across this beer in Michael Jackson’s Great Beer Guide and thought it very interesting.

This ale is a Triple by nature with the addition of spruce and pine for bittering.  Now, normally triples are the hoppier of the Belgian trappist or abby ales that are lighter in color.  I was not completely sold on the idea of pine/spruce balancing out a 7.5% abv yeasty brew.  However, I was taken aback by its complementing qualities.

When poured it opened up immediately into a very bready earthy aroma similar to well known triples.  Surprisingly though it lack that hoppy punch and instead offered a mellow jammy scent as found in quads.   I was expecting a burst of pine similar to a fresh bucket of pine-sol mop solution, yet it was restrained.  Smelled close to the Summit Heather Ale I previously reviewed, but no heather was used.  After some time I started to pick up on the aroma, and finally!  I recalled my families annual Christmas tree cutting.  The smell of scotch pine, spruce, and northern pine trees wafting through the air drove home the notes I picked up in the beer albiet they were minor.  The color was a shaped darker than most triples with a copper hue topped by a one finger head.

The flavor profile was yummy and for the most part true to style.  The abv partnered well with the yeast to deliver a rich bready and pear-like flavor while the malt seemed close to what you’d find in an English bitter.  Where was the pine/spruce?  What I found in the back half of this brew ushered in a brand new experience for me.  Michael Jackson wrote that this brew is “oily, medicinal, peppery, and aromatic.”  I might not agree on the latter, but the remaining three adjectives are spot on.  It carries a great spruce flavor at the end which then translated into an aftertaste that is peppery.  It seems somewhat fruity as well, but for the most part has a fresh grassy, herbal pine taste.  You can really tell the spruce/pine flavor when you hiccup.  The drying effect coupled with a slight hint of band-aid/Vick’s vapor rub (not in an off-flavor sense) gave it that medicinal effect.

Surprisingly well balanced, this was achieved without the use of hops…crazy!  As it warms the interaction with the bittering agents increases.