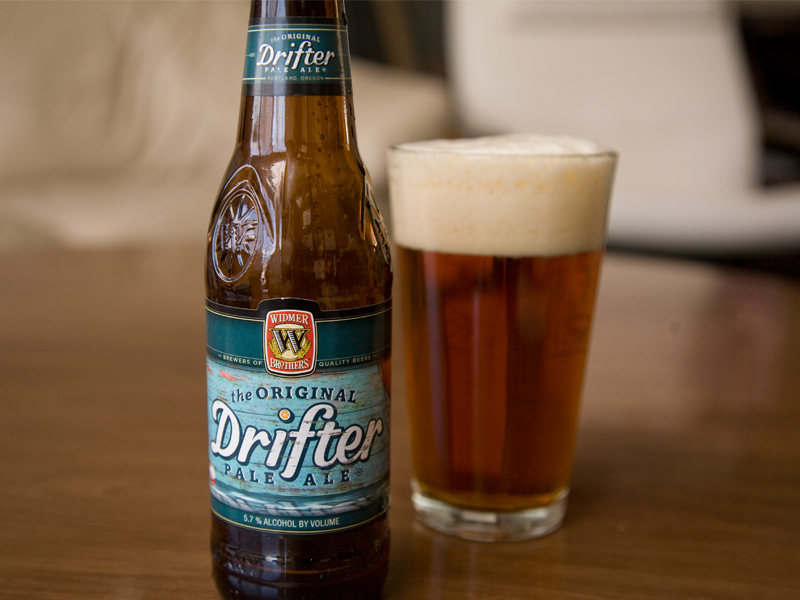 Taylor: Widmer Brothers are most famous for their Hefeweizen, which is the highest selling of its kind in the United States, and holds a place on the annual craft beer earning sheet. I myself have never tried the Hefe, and over a year since I got into beer, am only now trying a Widmer brew for the first time. The Drifter Pale Ale seems unassuming as a constant year-round offering, but one look at the grain bill, which contains some stuff I’ve never tasted before, and I am interested.

Poured into a run-of-the-mill tumbler, the beer is a thorough copper hue, clear all the way through. I like well filtered beer, as this one looks to be. It’s darker in color than most Pale Ales I have tried, and looks to be in the color range of Three Floyds’ Alpha King and Sierra Nevada Pale Ale (some truly distinguished company). I am delighted by the nice carbonation, which produces a great big off-white head and some good lacing. The beer smells citrusy and piney thanks to the Summit and Nelson Sauvin hops, used both in the boil and for dry-hopping. The latter I have never heard of before, and are apparently a New Zealand varietal. The profile of this particular hop is fruity, “fresh crushed gooseberries”. In fact, the “Sauvin” part of its name comes from the fact that its oil profile is also used to describe the grape varietal Sauvignon Blanc. I am not sure what gooseberries smell like, but I don’t think I smelled any in the nose.

The first sip of this beer surprised me negatively. It started with a well-balanced mix of fresh hops and sweet malts (there are a bunch of malts in this one), but the second half of the sip, as well as the finish/aftertaste, made me think of nothing but … meat. Now, I really enjoy meat. I grill filets and chops like a good American … but as an Ace of Spades in my pint of Pale, not so much. One consideration to make regarding this taste, which sits (as far as I can tell) somewhere in the “Sulphury” category on the beer flavor wheel, is that the bottle I am drinking expired 11/24/10. Still, that is less than 2 months ago.

So it’s not at its freshest. And while the meaty flavor in the beer kind of puts me off, it isn’t super duper strong, so I was able to finish the beer (but mostly out of curiosity, and to make sure my taste buds weren’t just messing with me). I would be very interested to hear opinions from others who have had this beer. I don’t imagine this meatiness is a purposed flavor. Still … I must judge the beer I am drinking. This bottle of Drifter Pale Ale earns an A for how it looks and smells, but an overall C because of taste. Grade: C

Tom: This sturdy, rustic copper color brew that failed to produce any noticeable head for me (user error I’m sure) was a letdown. The aroma was sweet, caramel-ish in nature with a minor floral/herbal pine quality, but lacked the true essence of the Northwest in my opinion. That hoppy smack I was looking for was lost in a more malt focused APA. While the bitterness was noticeable the hints of toffee and toasted grains made me lean towards classifying this as a light Red Ale. Not a bad brew, but not the best rendition of an APA I’ve had. I’ll stick with Widmer’s iconic Hefe. Grade: B-

This beer seems to suffer from a strange multiple personality disorder. Its bright, dry-hopped smell tells you one thing, and almost tricks you into chugging it down, but upon sipping you encounter a completely different beast. A ho-hum mixture of caramel malts and floral hops meets your tongue, and the freshness and zing you’re expecting never arrives. I didn’t experience any off flavors like Taylor did…but nothing sticks out as being particularly groundbreaking.

Dry-hopping seems almost a dirty trick to me if you’re not going to impart a stronger hop quality into the brew itself. And Drifter seems to have taken this road. It’s an average pale ale moonlighting as a much more complex beer. Decent…but I’d rather have something else. Grade: B-