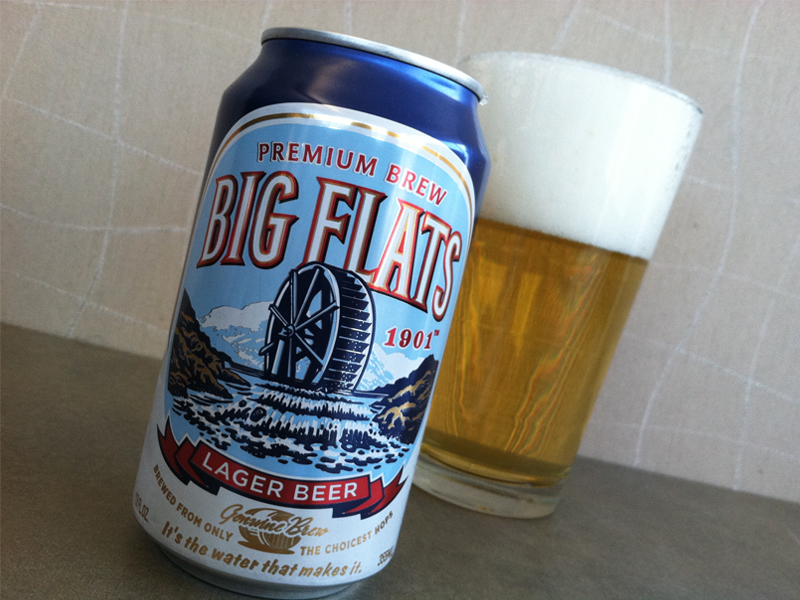 Move over AB InBev and MillerCoors … Walgreen’s is in town with their “50¢” beer, Big Flats 1901. It’s an American Adjunct Lager just like Miller Lite, Bud Lite, and Coors Lite. Except it’s 50 cents per can. And sold exclusively at Walgreen’s stores. Recently Walgreen’s added a mini-grocery and liquor section to their stores, and Big Flats 1901 is their flagship — and only — exclusive beer. In a market dominated by the “Big 3”, what should we think about a brash upstart like Big Flats 1901 Lager? Now, there is somewhat of a mystery as to who actually does the brewing of this beer. As far as we can tell, it seems like it is likely Genesee that brews it. But we don’t know for certain.

As a craft beer enthusiast, I would be remiss not to scoff at the concept of beer from Walgreen’s. It’s pretty absurd. But there are some redeeming qualities of this beer. Let’s give it a chance and see how it compares using our normal reviewing standards:

Appearance: First off, it comes only in 12 oz. cans. The design is nothing special … you can’t really tell if it’s supposed to look retro, or be modern. Because it certainly achieves neither. Still, it has that all-too-familiar blue/silver/red color scheme, and that is certainly not by accident. The beer pours a light straw color out of the can (really, am I going to drink this out of a glass?). It easily develops a large, lightly packed white head, which diminishes to nothing in about one minute.

Aroma: No surprises here. Even with a fluffy head, there isn’t much there in the way of smell. I can pick out that common slightly-yeasty, borderline-urine smell, which comes from the fermented adjuncts (in this case corn and rice). Not a smell you will experience when drinking craft beer, because craft brewers stick with classic malted grains: barley, wheat, and sometimes rye. I would say the smell of Big Flats 1901 Lager is closer to the Milwaukee’s Best Ices and Natti Lights of the world.

Mouthfeel: How does it feel in your mouth? Well … it’s highly carbonated, and as a light lager it leaves no real experience in your mouth. And it certainly gets worse as it warms. So drink it fast.

Taste: This adjunct should be on your radar if you enjoy BudMillerCoors and live anywhere near a Walgreen’s. It is thin and highly carbonated, and has that super-light bready, yeasty taste to it that vanishes within moments of a gulp. At 4.5% ABV, it is par for the course in terms of style. It tastes no different to me than Bud Light, Miller Lite, or Coors Light.

Overall: Walgreen’s Big Flats 1901 Lager should be considered next to BudMillerCoors as a viable replacement. Sure, there is zero marketing budget. Sure, there are no Big Flats Girls at the Super Bowl. But in this economy, a 6-pack of beer for $2.99 is the best possible solution. It’s that simple. Could craft brewers sell a 6-pack of cans for $2.99? I think someone could figure out how to do that. But until then, this is the beer you want when it’s been a long week and all you’ve got in your pocket is a couple of wrinkled-up singles. There is absolutely no reason not to buy this beer instead of BudMillerCoors. Look at the price, people. Even though the beer tastes less-than-desirable, it should easily be rated a C based on its affordability. I would be very, very interested to find a less expensive, commercially-distributed beer than this one.