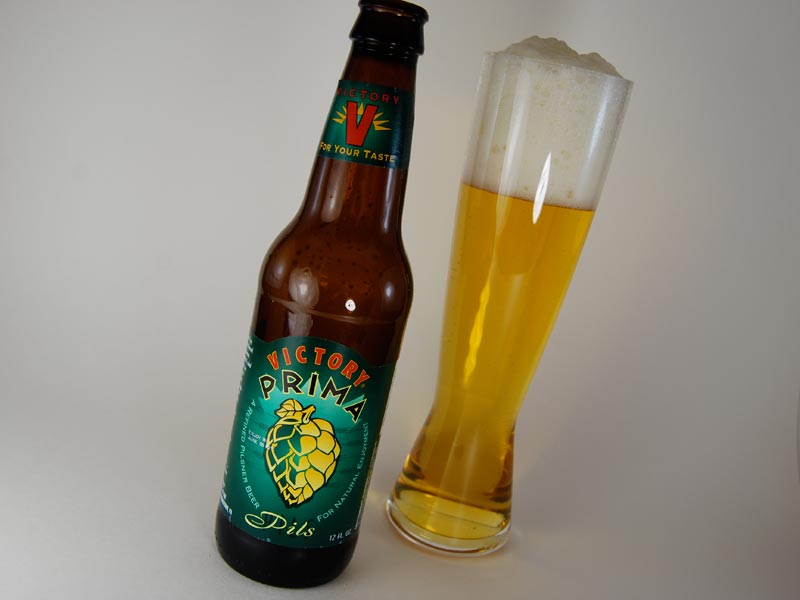 Michael: After a six day strep-induced beer drinking hiatus, I am cautiously stepping back into the arena. With a pilsner, I figured I couldn’t go wrong. It seemed like an easy drinking style and my still tender tonsils couldn’t handle much more than that.

After reading a bit more about beer recently ala Randy Mosher’s Tasting Beer, I learned that a ‘real pour’ was straight down into the glass, causing a hugely puffing head, followed by patient repeat pours until the glass was full. The result, apparently, was a solid, reputable head, one to be proud of. Well, this pilsner puffed a head so fast, my glass was soon full of foam. Patiently, I waited, filled and repeated until I had a nice compilation, a beautiful body of bright gold and a nice white cap. Bubbles rushed and raced through the core. It smelled brilliant. It was clean, clear, bright and crisp. Everything a refreshing pilsner should be. There is a lemony fresh yeast on the nose too. It’s in these characteristics that the Big Three are separated from craft brewing. The typical light lager may appear to look similar to this pils from Victory, but one whiff and you realize that there is indeed a distance.

By the time I swallowed my first swig, lacing had already elegantly drifted down the glass. It tasted as it smelled, clean and refreshing with a bit of peppery spice, just enough to make it interesting. It went down smooth, easy and light and would be an obvious complement to a nicely grilled burger. I will definitely be back for Prima this summer… Grade: A-

John: I’ve confessed many times that I am not a big pilsner fan. I still am not after drinking Victory’s Prima but I’m making some progress. What is changing? Hops! This brew has more hops than any pilsner I’ve ever tasted. It pours a cloudy straw color with some effervescence, an inch head that mounds to heavy lace and then dissipate before long. As per the advertising I was looking forward to the influence of hops and the aroma was just that. Along with citrus and some grassy hints I enjoyed the first impression. I think it was the malts that took me to the end both in smell and taste. Not being a pilsner fan I still enjoyed this more than most. It went down with a nice finish, smoothly with a dryness for after taste. Crisp and refreshing for sure and certainly a high quality beer as is fitting from one of my favorite brewers. Nice to have brew masters that want to get us a higher caliber pilsner than the household variety that makes me gag. Grade: A