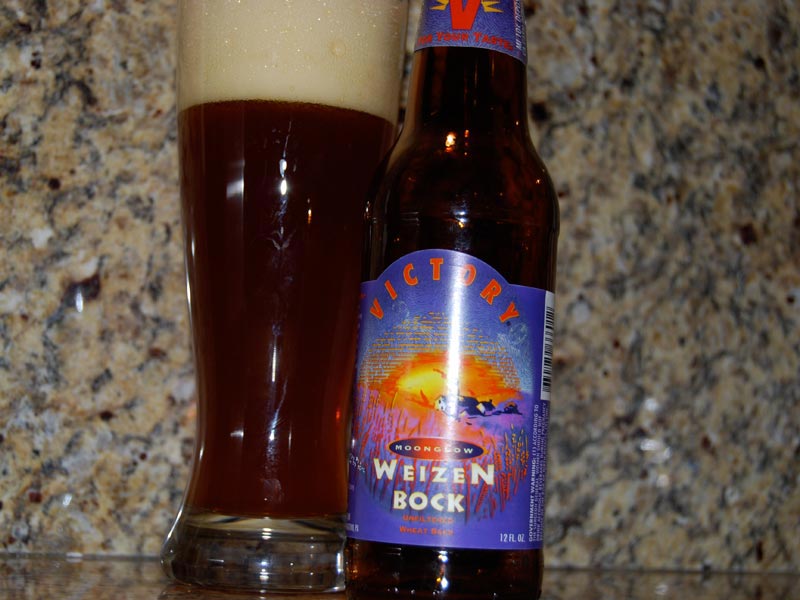 My most recent trip to Binny’s embodies my current beer-drinking dilemma. Too many beers and far, far too little time. As I wandered, seemingly aimless in my pursuit of what could be my next favorite brew, I was stopped by a couple of the beer experts at the store. I asked for their recommendations and they pointed from one enticing bottle to the next. Every single one sounded good. So I stocked up on a few of their picks. As they walked away, one told me that there were ‘a bunch of great six packs’ around the corner, too. ‘Six packs?’ I thought, ‘well I better go take a little look-see at these great six packs, shouldn’t I?’ Needless to say, my basket was six bottles heavier a few minutes later with a style of beer that up to this point has been uncharted territory.

I’ve never had a Weizenbock before, but tonight’s Victory Moonglow Weizenbock will definitely have me coming back again. The color, reminiscent of a light, refreshing wheat beer, had an immediate appeal. It was a rich, deep orange, bordering on amber. A fluffy two finger head had great retention throughout the next half an hour of sipping. This beer was interestingly scented with a bready caramel and went down incredibly smooth. It wasn’t until the last few sips that I realized just how well the flavors masked the almost 9%abv. There was faint toast lingering over every taste and a malty sweetness that simply soaked your tongue until your next sip. I was incredibly pleased with this new find and will be venturing into Weizenbock’s again in the near future. Good thing I stopped and checked out those ‘great six packs’ after all.