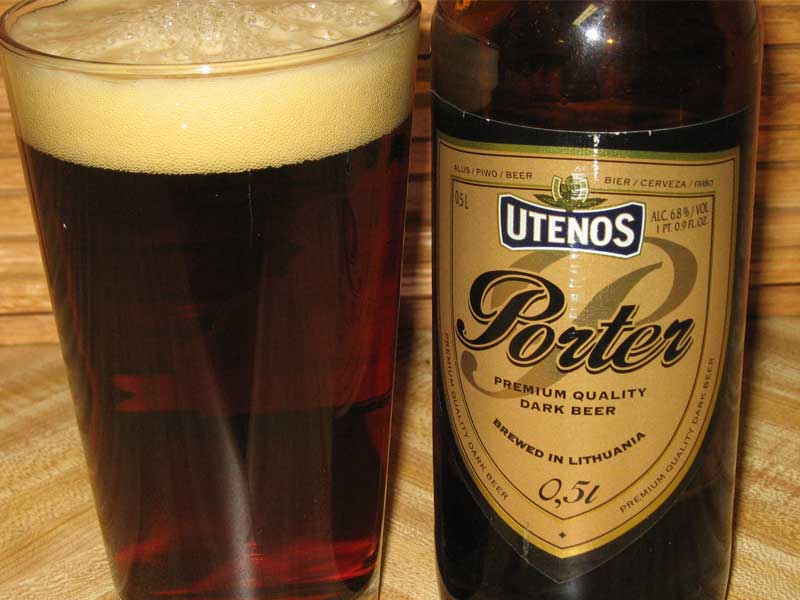 Well, I found another beer from Lithuania. Utenos Alus is a small brewery in the town of Utena. While doing some research on this brewery, I found out that Baltic Beverage Holdings (BBH), who is owned by Carlsberg Group (maker of Danish beer with same name), owns Baltika, Utenos, and Švyturys breweries. I found this interesting, given that I sample beer from all three breweries in the last week. It also goes to show that giant conglomerates are everywhere looking to buy up anything to make a buck.

The beer sitting in front of me was a Porter, but it looked like an English Brown Ale. While the two maybe close in style in England they are worlds apart in other countries (at least I assumed). The region Utenos lies in is known for its strong Baltic Porters and Russian Imperial Stouts. That was what I had in mind approaching this beer.

Going off my notes I took it had a nice ruby-brown color which might have been its best feature. The head sank quickly and it smelled of caramel typically found in Brown ales. There was a very minimal hint of roasted grains, and the caramel was sharp to the nose and tongue. In 2001, it was said to be the best dark beer by the Chicago Beer Tasting Institute. I would beg to differ. While, it was not bad tasting, it was nothing above good. It had a somewhat warming alcoholic presence, was not balanced appropriately for a Porter style beer, and lacked bitterness (either from hops or roasted grains).

The mouthfeel was medium-heavy and had a rather watery, cheap taste to it. There was a metallic finish, low carbonation, and was not smooth as it went down. Overloaded on the malt side of things, it did fight to leave a semi-sweet aftertaste, but that diminished quickly. I was hoping for a Baltic Porter and had a hard time adjusting my expectations. Don’t do the same!