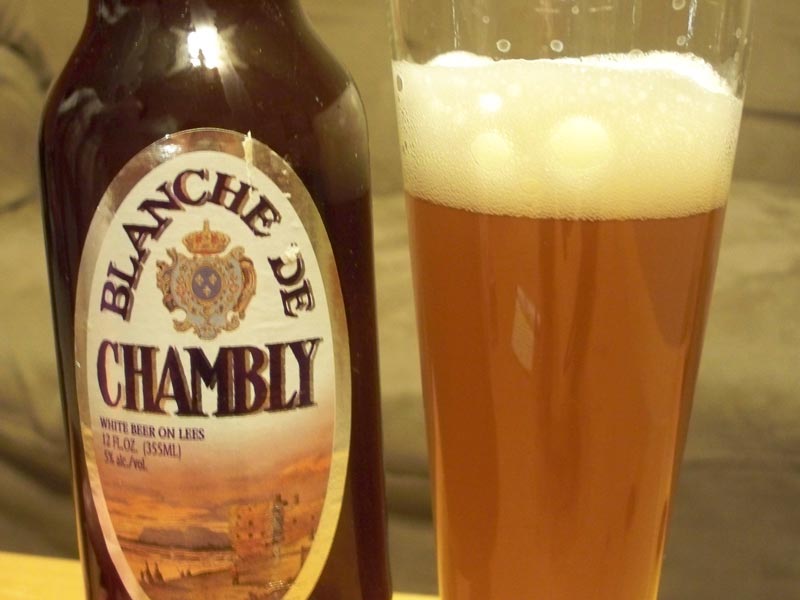 I was eager to try this witbier from Quebec because it is refermented in the bottle. This beer is the first one brewed by the young Canandian brewery, Unibroue, that has only been around since 1992. According to my reading, refermentation is the same process referred to “bottle conditioning” in England. This is the practice of adding yeast to the bottle which allows additional fermentation as the bottle sits on the shelf. Some people will keep a bottle conditioned beer on the shelf for awhile because it mellows over time and can grow in complexity. However, Unibroue says that its shelf life of this beer is only two years.

It first pours a very carbonated, golden color with a very foamy head. The carbonation often is greater in refermented beers because of the added yeast which causes carbonation. The bottom of the bottle was full of sediment and as I poured it in the glass, the color became very cloudy. Some prefer to not pour the sediment into the glass but I like the whole bottle because I enjoy the “goodies” at the bottom.

The smell was very yeasty – which was expected because of the additional yeast that was added for bottle refermentation. I also picked up a hint of citrus mainly orange with a little banana. The taste was very smooth and not bitter at all. This beer is very refreshing and I’m sure would be even better on a hot day. This was my first experience with a Unibroue beer and while it wasn’t the best witbier I’ve ever had, it makes me want to try some other brews by Unibroue.