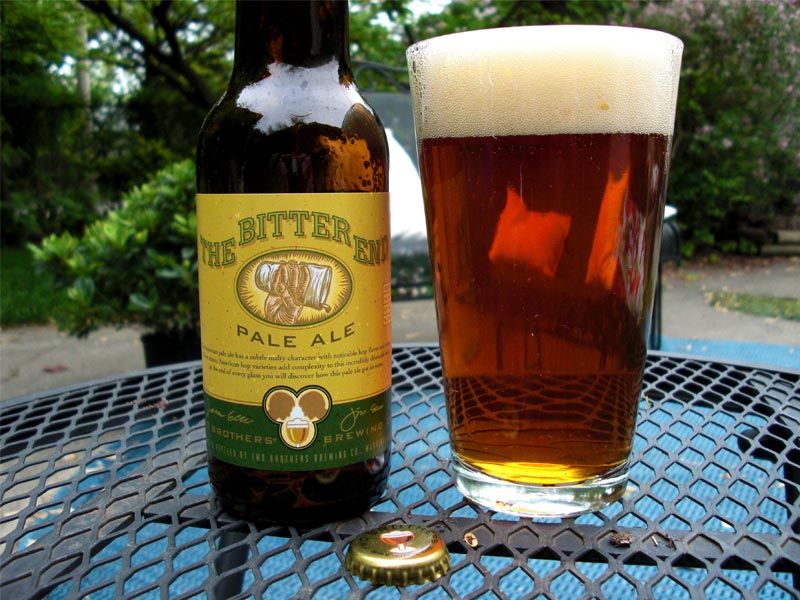 As I quickly perused the interwebs for a few of the vital statistics on this beer (a normal practice for me), I was again struck by the travesty that is Two Brothers Brewing Company’s website. Honestly, for a brewery of their caliber…it makes me grimace. The “default” (a.k.a. uncreative) layout, the ugly 80’s wallpaper-esque background, the spelling/grammatical errors, the uninteresting fonts and photos; I yearn for them to catch up with the majority of the craft brewed world in this category. But…I will continue to forgive them for it, because they continue to fill my stomach with tasty brew after tasty brew.

Of all Two Brothers’ year-round selections, Bitter End has to be my favorite. A tasty, well-balanced, reddish-gold colored American Pale Ale that talks a big talk but is really quite friendly to your average beer drinker (it comes in at 30 IBUs). I’ve never officially confirmed the “three classic American hop varieties” used in the beer…but with that description, there’s probably no need to. Cascade, Columbus, and Centennial would be my guess. And they really do provide a great flavor palate of bitterness; Bitter End has floral, citrus, and spicy hop notes that are at the forefront of the smell and taste. They never completely overpower the toasty, honey malt in the background…but they are the heart and soul of this beer. In my opinion, the malts add just enough flavor and body to make it fall more on the smooth, sessionable end of the APA spectrum than the “fresher”, more hop-heavy end. Carbonation is medium…right about where you’d expect it to be. And like many American Pales, it’s a great year-round brew, performing admirably at cold and warm temperatures.

In the end, it’s really a pleasantly bitter beer rather than an extremely bitter one, so don’t let the name fool you too much. But it still deserves a solid endorsement for its quality and widespread appeal. Now if only the same could be said for the website…