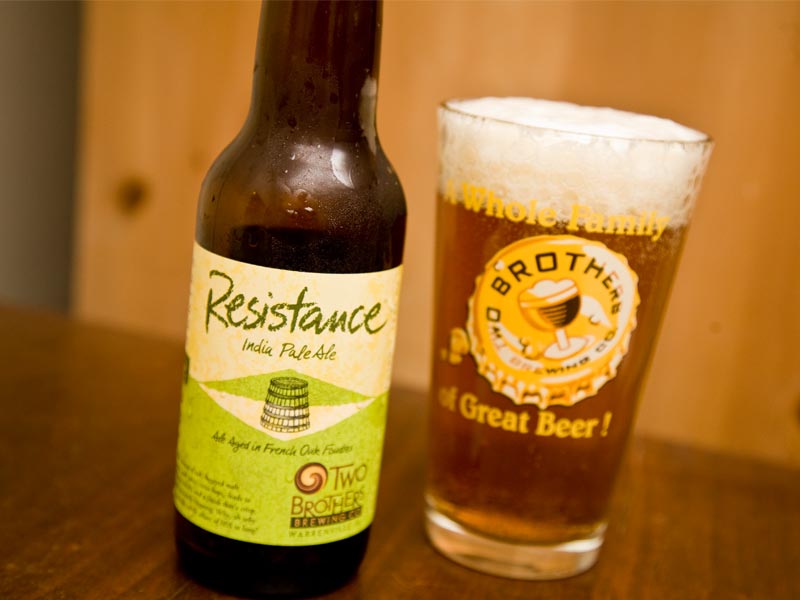 Resistance IPA is a special release IPA brewed by Two Brothers Brewing Company in Warrenville, Illinois, just outside of Chicago. It boasts an ABV of 6.9%, is brewed with honeyed malts, and aged in French oak foudres. The following are our thoughts on this beer:

Noel: This “J Series” special release India Pale Ale from Warrenville’s finest turned out to be the perfect distraction while I witnessed the most forgettable opening day in Cubs fans’ recent memory. Really, it was terrible; just awful. The beer, thankfully, was not. I admit I’m partial to more traditional, English-style IPAs (a la Goose Island’s), and Resistance fit the bill admirably. The label doesn’t lie about honeyed malt and piney citrus hops…they’re both present and delicious. Some definite hints of grapefruit (Amarillo?). I couldn’t really pick out any oak notes from the foudres, but the body seemed smoother than most, and in my opinion 70 IBUs never tasted so subtle. About as balanced and fresh as I’ve ever experienced in an IPA. No resisting here; a new favorite. Grade: A

Taylor: This IPA has finally completed what I’ll call my “Hop Trinity”: three delightful IPAs that are equally distinct, yet of the same quality. These are the three “essences” of this unified trifecta: Goose Island IPA, Three Floyds Dreadnaught IPA, and now Two Brothers Resistance IPA. I’m grateful for Two Brothers not just because I’ve been in their brewery and met their people, but because they brew with integrity, creativity, and are community-minded. The approach: with its simple, earthy label; clear copper in color with an airy, bubbly white head; nose bursting with citrus and pine. The taste: powerful citrus, bitter pine; surprisingly smooth thanks to honeyed malt; finish tart like an IPA should finish. Great nose, excellent mouthfeel and flavor, commendable finish. An instant classic. Grade: A

Tom: Wow! I believe this beer is the closest thing to Goose Island’s IPA that I’ve come across. It is a delight. The hops are bright and well-rounded. There is a fruity dynamic with hints of apple, peach, pineapple, light grapefruit, tangerine, and lemon. There is also a floral aspect with hints of honey and spicy earthy tones. The beer really pops right under your nose! I do not get a large French Oak presence, but I feel is does aid in mellowing or softening the beer as a whole. If anything, it simulates the IPAs of old shipped to India. The malt provides a solid foundation leaving behind a straw/hay-like aftertaste. This brew far exceeds their Heavier Handed IPA. I would categorize it as, “my kind of IPA!” My roommate adds: “there is a gentle fizz to it. The carbonation and fresh, Spring-like hop quality make this beer lively.” Grade: A

Michael: An apple-juice-colored brew, with a channel of carbonation rushing through the center of my glass, puffing the 1/2 finger vanilla head. A piney, floral hop combination was evident on the rich nose. The hops dominates, of course, on the tongue as well, balanced and blended with a little bit of citrus. The brew sheds its lacing down the entire glass. The finish has a faint nuttiness, but is light and refreshing overall. While I don’t know exactly what the French Oak Foudres did to this brew, I know next time I see a sixer, I won’t be able to resist. Grade: A-

Matt: The first smell I got was of Fruit Loops, still my favorite cereal to this day. A welcome, fruity, bready, aroma. Pours a rich, straw color, clear with one finger head, plenty of bubbles coming up from the center of my glass. Heavy lacing is produced as I drink this, clinging to the sides of the glass. Solid hop aroma and taste, balanced by adequate caramel malt notes. No off flavors, very typical IPA, I feel it resembles Goose Island IPA. Some bready notes, solid bitterness coupled with a sweetness from the malts. Nothing too noteworthy, but also nothing negative to say. I like this beer. Solid IPA. Grade: B