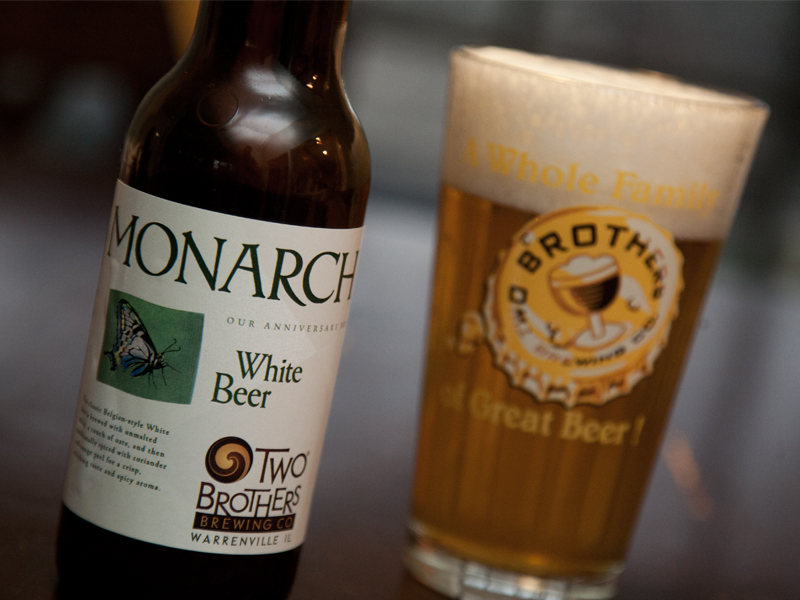 Monarch White is an anniversary seasonal brewed by Two Brothers in one small batch every Spring. It figures among a seasonal lineup of Dog Days Lager (Summer), Heavy Handed IPA (Fall), and Northwind Imperial Stout (Winter). I was given my bottle of Monarch White as a gift from my brother-in-law … while it is a regular Spring release, easily obtained here in Chicagoland, I had never tried it before.

I am not a major fan of wheat beers … they taste too musty and yeasty to really get excited about. That being said, there are a few wheats that I enjoy … mostly Pale Wheat Ales and some Witbiers. Monarch White is one of he former, so I approached the beer with thoughts of other Wits in the back of my mind (Leinie’s Sunset Wheat, Wittekerke, Estrella Damm Inedit)…

First of all, I enjoy the label of this beer. It is simple and bold, with good color and contrast, and I like the off-white background hue. I pour it from the bottle into a standard Two Brothers pint glass (will that make a difference in taste … no). Immediately I know two things: the beer is very well carbonated and will likely be on the yeastier side of the Witbier spectrum. It took me about 2 minutes to complete the pour of this one … the head lept up so quickly I had to take many, many breaks. The head is eggshell white and dissipates quite quickly, leaving significant lacing on the sides of the glass.

Monarch White smells like a yeasty Witbier. There were the familiar banana/clove notes common to wheat beers, as well as a touch of sweetish lemon and a bit of spiciness, possibly from the hops and/or spices that are in the beer. Finally, I taste the beer and I think I was pretty close to what I thought it’d taste like. It’s definitely a wheat beer taste … quite yeasty as a matter of fact. Has characteristic orange and lemon notes to the taste, but I think the yeasty/bready dominates, making it less refreshing and a little more heavy. If it weren’t for the carbonation, I think this beer would really disappoint.

At the end of the day I would imagine this beer is probably hit or miss with most people. Felt like more of a miss to me, because I felt the yeast was way too involved. Not a bad tasting beer, especially if you enjoy the whole wheat experience. I guess this one is the only Two Brothers seasonal I will not be enjoying … I really do love the other ones.