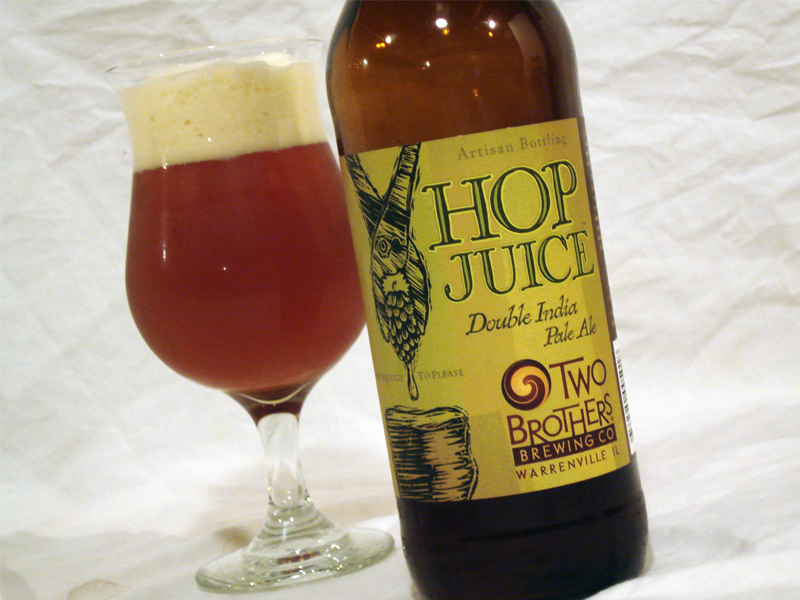 Once again it is a hot and humid day here in the Chicagoland area. Wanting to enjoy my Sunday afternoon I found myself yet again hunkered down in my cool basement for a bit of relief from the heat. Upon dozing off to some old episodes of The Office, I figured it was time to wake up and be a little productive.

That meant doing some laundry while enjoying a beer. The beer chosen for just a time as this was Hop Juice. A Double IPA from a local brewery that is becoming increasingly sought after in the brewing community. This seasonal release if accompanied by a festival in the Summer celebrating its namesake.

Cracking open the 22 oz bomber (which at 9.9% you might want to share) and pouring it into my tulip I instantly got a big whiff of hops. With the tagline “we squeeze to please” on the bottle no wonder this beer reeked of dank hops. It seems as though every drop of resinous hop oil has been pressed and captured in this beer. Huge deep aromas of spicy, piney, sticky, resinous hops wafted up into my nose. Not too much citrus as it was more dank and pungent. Some fruits like apricot, pear and apple were present. In addition to the hops the malt was rather substantial as well. Offer up a toasty, caramel, somewhat biscuit aroma it was clear that this beer had residual sugars.

This brought me to an interesting place. What my nose told me was, “this is going to be delicious” and my eyes told me “you like lighter malt double IPAs.” The appearance was an orange copper/bronze hue which meant a deeper malt profile. The head was dense and creamy and rather delayed in forming (heads up as you pour). I enjoyed the appearance and thought it showcased a fine beer, it is just that my psyche had preconceived ideas.

Taking my first sip proved me wrong. It was very bitter. One thing I did realized half way through the bomber was that this beer was most likely dry hopped. Upon investigation I found out it was. That dank pungent aroma was also present in the taste. Hop oils coated my palate and did so in an aggressive way. I guess the malt profile I was worried about really only displays itself towards the finish. Here is where the residual sugars give that caramel toasted bread aftertaste. Other than that it is pure hops.

3 years ago I had this beer and thought it was outstanding. Last year (2010) I thought differently. For some reason last year’s vintage was not as potent. However, this 2011 vintage has brought me back to that initial reaction of, “oh wow!”