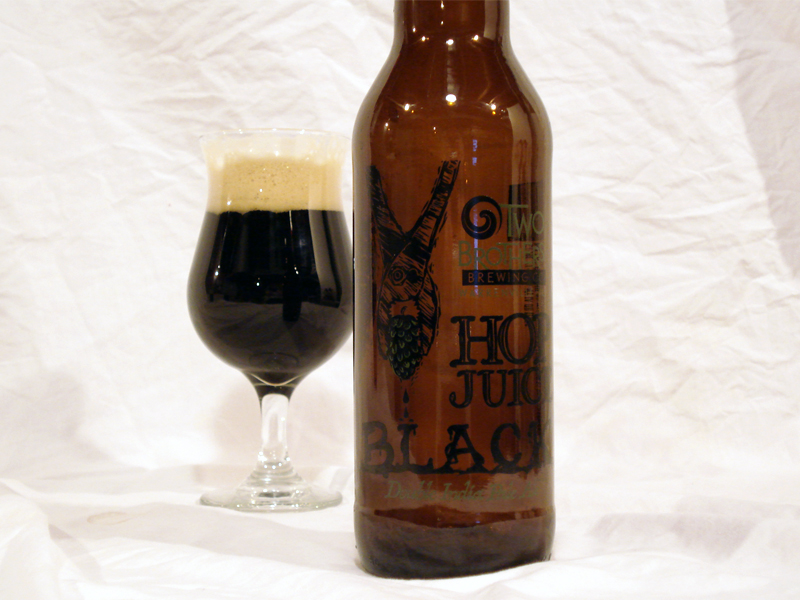 In 2011 Two Brothers released a one-off variation of their seasonal double IPA called Hop Juice. With a growing popularity in the Cascadian Dark Ale style they affectionately called it Hop Juice Black. What follows are my findings:

The appearance was just as expected. Obsidian in color with dark brown edges and a similarly dense and creamy head to the original, but with a beige hue instead. It does lace and last giving me the impression that this is a quality brew.

When it comes to this style I must say I’m rather confused. Who said pairing two extremes against each other in the same bottle was a good idea? Black IPAs are NOT well balanced. They can’t be at their core. On one side you have highly roasted and astringently bitter grains while on the other super sticky and resinous hops. What one should consider in reviewing beers of this style is if both ends of the spectrum are represented well.  Afterall, I think that is the point.

In this beer I do find both sides and they are equally represented, yet mutually compatible. The aroma is filled with deep coffee and chocolate notes while at the same time exhibiting the same piney resinous hop quality of the regular Hop Juice. I must say I prefer the coffee quality more so than just a roasted grain presence. This beer, gives a little bit more depth than other Black IPAs. However, it is not as hoppy as the Stone and Southern Tier versions of this style (if the hops are something you look for in this style).

Surprisingly enough, there was a wonderful Porter-type flavor and mouthfeel to this beer (albeit it was thicker than a Baltic Porter). Eloquent coffee aromas and flavors dominated the malt side of things while the same hop profile found in Hop Juice made its presence known.

A great beer that might be extremely hard to find as it was only release at the Hop Juice Festival. If you can find a bottle on eBay I would recommend bidding for it.