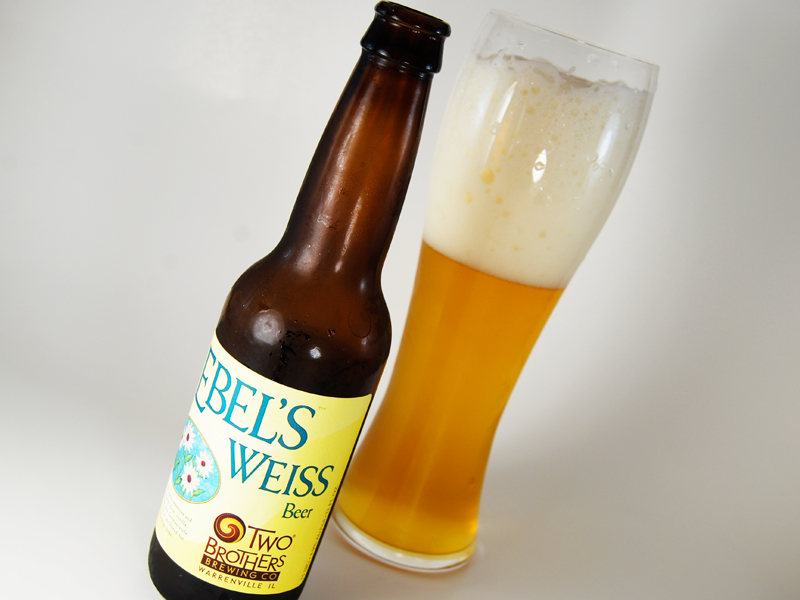 There are those beers that you think everybody has tried. In Chicago, Two Brothers Brewing Company is one of those breweries that produces just such beers. So, when I took a look on The Perfectly Happy Man before embarking on a journey of taste with Ebel’s Weiss, I was surprised to see that this beer was, of yet, missing from these storied pages.

I like wheat beers. I was first moved into ‘craft beer’ by my initial infatuation with Blue Moon. I love German Hefeweizens especially and this one from TwoBros claims to have been brewed in just such a style. The initial pour gave the usual huge hefe head, buoyant, fluffy as a bubble bath and strictly white. The four fingers dwindled rapidly, however, and just an inch remained to greet my upper lip on my first sip. It was a nice hazy orange, a surprisingly consistent tone through the entire glass, it practically looked like a picture. Seeking out the claims of ‘clove, vanilla and banana,’ I was pleased to find  a solid burst of both banana and clove, but had to conjure up the vanilla with hope more than accurate smelling.

The immediate taste was pleasant, meant for an 80 degree, sunshiny Tuesday evening like tonight. It literally made me happy. The banana was there, fairly forward, but lingered as well, weaving in and out of the other flavors, but the most consistent of them all. There was a little spice, both in the center and toward the end of the sip and a heavy dose of sweetness as well. It was an overall refreshing feel, decent mouthfeel and a not overly dry finish.

Another decent offering from one of Chicagoland’s fine establishments. A good choice to accompany a fruity desert (I had it once with a pear tart and it was incredible) or as a sweet, light pre-dinner drink.