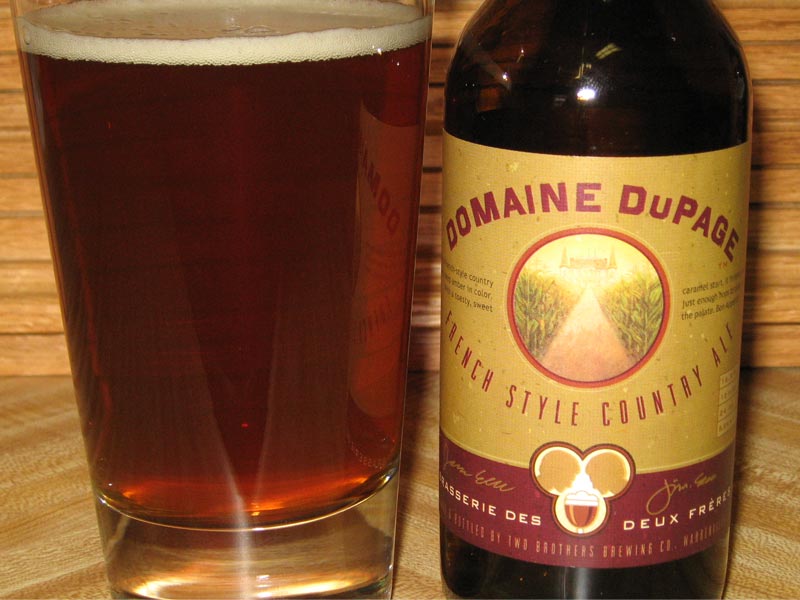 Well, after getting some burritos and having a mini marathon of MacGyver with my roommate it has officially become a lazy Sunday afternoon. The temperature outside dropped and with a fire going inside I decided to crack open a beer. I believe a nap is in line after this review is done.

Piggybacking off of the great review done on Two Brothers Brewing Co I thought I would have one of their beers. The selection was their Northern French Ale (Biere de Garde a fancy way of saying “beer that as been lagered”). I’ve had this beer in bottles, and on tap both at Two Brothers and other restaurants. It is a rich malty beer that can be enjoyed on its own or with meaty dishes. In fact, I had it with pasta once and it seemed to pair nicely.

This style highlights the malt aspect of the beer and does you beautifully. There are overtones of deep caramel, toffee, sweet biscuit, and nuttiness which I thought had hints of peanut butter. The color is deep amber or copper and slightly hazy. There was a woody, down-to-earth quality to it which I feel was due to the hops which took a back seat in the aroma. The taste was wonderful for those of you who like malty beers. It was all there. With a light to medium mouthfeel the sweet toasted grains gave my taste buds a warm, hardy handshake. There was some bitterness on the back of the palate that subdued the malt flavors with just enough strength and left a semi-dry finish. As far as the aftertaste goes, my mouth was left with a residual toasty sweetness which was very pleasing. With my nap quickly approaching I’d say this was another well done beer by Two Brothers. I would favorably recommend it.