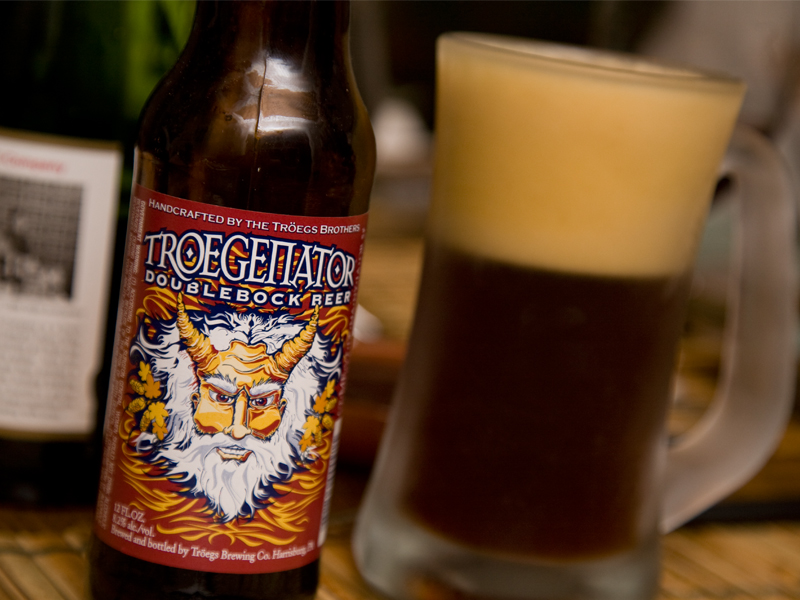 Doppelbock. Is there anything this malt monster can’t do? In my exploration of beer, the style has emerged a serious favorite. Historically, doppelbock, or “double” bock, is merely a stronger form of the bock, which is a dark and malty ale first brewed in the 14th century German town of Einbeck. As Noel quipped in his Paulaner Salvator review, “Doppelbocks are perhaps the cream of the bock family, and as a style could be dubbed an “anti-IPA”: everything IPAs or double IPAs possess in hop power and ale complexity, doppelbocks do in malt strength and a cleaner, simpler lager body.” It should also be noted that historically doppelbocks are named with the “-ator” suffix (e.g. “Troegenator,” “Salvator,” “Celebrator,” etc).

Tröegs (pronounced like “trogues”) in Harrisburg, Pennsylvania makes a great doppelbock. The Troegenator Double Bock is an award-winning beer including a recent gold medal in the German bock category at the 2010 World Beer Cup. It has also medaled in the Great American Beer Festival, which is no small accolade. This one was poured into a frosty beer mug at the Christmas dinner table … a classic context for the style, which is often brewed and enjoyed in conjunction with holidays.

Aromatically, Tröegenator fits the style to a T, with a deep, sweet, roasty malt smell and a hint of spice. Poured straight into the bottom of the glass, as all good beer should be, this big doppelbock builds a nice big tan head that’s full of intricacies. After the first sip, it’s clear that Tröegenator can run with other brews in the style: it’s full of wonderful German malts (and a subtler helping of German hops) that impart that wonderful “liquid bread” taste. It’s bready, it’s nutritional*, it’s sweet, and a little spicy. Hop bitterness is relatively absent. It’s crisp and well carbonated. It’s also a nice dark amber, clear all the way through.

Tröegs’ doppelbock reminded me of the excellence of the style, paid homage to the classic, historic ingredients and recipe. I see no reason this beer should ever earn less than a solid A grade.